You need to enable JavaScript to run this app.
News
Save The Children
Nia Goodridge '17 Associate Editor
May 20, 2015
No Comments 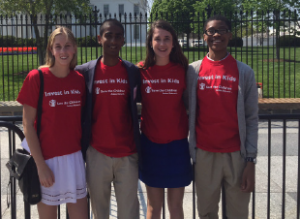 Save the Children is a non–profit organization devoted to giving children around the world aid in various forms such as food and medicine, the opportunity to learn, and protection from harm. Save the Children has helped the lives of 143 million children so far.

Kate Palmer, who brought the organization to Deerfield’s campus, described Save the Children as a model charity: “The organization has always been there for me. I have been involved with them for years doing numerous trips, vacations, visiting and volunteering with them.”

Save the Children’s anual Advocacy Summit is an opportunity for youth to raise awareness of issues troubling other children. During Advocacy Summit, students learn from experts about the worldwide challenges facing children today, and discuss how to make change with politicial leaders. Additionally, students attend exhibits and forums with participants from around the country, and they visit Capitol Hill to advocate for children before various lawmakers.

At the Summit this April, students advocated for Early Childhood Education, a program designed to improve pre–K programs and maternal and newborn childhood survival, as well as for ways to end preventable child and maternal deaths. Students also sought to put children’s welfare high on the United Nations’ list of Sustainable Development Goals.

Yattassaye described his motivation for attending the conference: “Because I have parallel lifestyles in Harlem and Mali, I thought going to the summit would be a great way for me to advocate for the voices that are not really heard.”

Thayumanavan described meeting representatives at Capitol Hill as a surreal experience: “When we got there, [the lawmakers] were willing to listen to me more than the adults—on Capitol Hill it is not just about the here and now, but also what you leave in the world for the next generation.“

After watching students advocate and implement life skills at the Summit, Mr. Miller concluded, “When we talk about how to build an argument or how to speak publicly or how to do research, it’s hard for students to see these are important skills. I felt a lot of pride seeing students rise to the occasion. People were taking notes vigorously, so they could be prepared to go out and make the best case possible, not to get a good grade, but because they wanted to make a difference.”

Palmer encourages other Deerfield students to also make a difference through Save the Children on campus. By going on the Save the Children’s website and becoming a child sponsor in the U.S. or around the world, each student has the power to invest in children; the power to provide them with the health and the education they need for less than a dollar a day.