You need to enable JavaScript to run this app.
A&E
Metamorphoses
Heyi Jiang '15 Senior Writer
May 20, 2015
No Comments

Have you ever pondered the nature of love?

If you have, Deerfield’s spring theatre production Metamorphoses may open up a new world for you, a world created within stories about love, where you are entrusted with the task of exploring the different origins, dimensions and consequences of love. 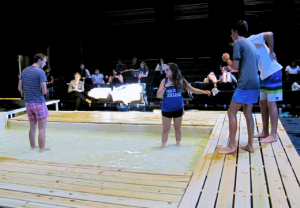 Metamorphoses,by American playwright Mary Zimmerman, is adapted from the classic Latin narrative poem Metamorphoses, one of the best-known works of Roman poet Ovid. The play “is about the transforming power of love— between fathers and daughters, husbands and wives, friends, gods, humans and strangers,” said Teaching Fellow and Director Katherine Speed.

Metamorphoses is Ms. Speed’s first play at Deerfield. The cast involves 21 actors, and each member portrays three or four parts. Such a large group brings much vitality to the production, but also poses challenges.

“My biggest challenge so far with this production has been finding ways to showcase the unique talents of all the members of our ensemble,” said Ms. Speed. “I have so many things I want to showcase about this cast and crew, but finding the best [way] in which to make that happen while still maintaining the structural and artistic integrity of the story is a puzzle.”

Ms. Speed noted the collaboration among the cast has been a real success: “My biggest joy so far has been watching our more experienced actors lend their knowledge and expertise to our newer actors and seeing everyone deepen their understanding of and love for the craft in the process.”

Sarah Jinich ’15, who has participated in eight Deerfield productions, said that the most difficult part of bringing Metamorphoses to life lies in the play’s abstract nature.

“The scenes in Metamorphoses have more movement and big spaces,” Jinich explained, “where there is lots of action and time passing without much speaking, so the hardest challenge has been to convey the progression of a scene in more creative ways.”

Assistant Director and actor Sabrina Alves ’17 is new to the theatrical experience. For her, the biggest challenge is interpreting her characters.

“As someone who hasn’t taken an acting class before,” said Alves, “I’ve had to jump right into figuring out my characters and trying to keep up with everyone else, which was pretty difficult. But DA’s theater program is amazing, and the transition from rehearsal room to stage has been nothing but smooth with help from the directors, Ms. Speed and Annie Bronfman.”

Visually, the setting of Metamorphoses is rather unprecedented. At the center of the Black Box theater, there is a pool, which separates the land of men and the land of gods, and many stories told in the play will take place in the water.

“We’ve done small amounts of water before…but this is the largest water element we’ve ever had,” said Paul Yager, technical director of the production. “The installation of the pool requires a large amount of calculation and deliberation; the weight of the water, its potential damage to the theater and hygiene issues are all concerns that must be managed when using such a large amount of liquid.“

Metamorphoses is an incredibly innovative and artistic play. We definitely haven’t done anything quite so modern in my time here,” Jinich said. “I also think that the message in this play is really special—it’s about how love has an indescribable power that can change us, and each scene approaches this idea in a really beautiful way.”

But what exactly is the nature of this power, and what is its connection to the perpetual theme of love? You are cordially invited to seek the answers in Deerfield’s production of Metamorphoses.