Ed Sheeran. Taylor Swift. Sam Smith. Iggy Azalea. These are some of the world’s most popular artists, all releasing songs and albums that become overnight hits. But behind each hit is a great producer.

At Deerfield, students who are interested in music production and songwriting have a chance to express themselves in the recording studio. John Van Eps offers Music and Studio Fundamentals each fall to teach students studio basics. He also teaches Songwriting/Composition in the winter, along with Studio Production. 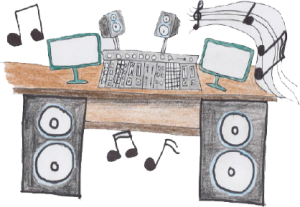 These classes are not the only ways to access Deerfield’s recording facility. Quentin Jeyaretnam ’16 currently has a music exemption for producing.

According to Jeyaretnam, “Mr. Van Eps brings some students in and teaches them the basics of how to use the studio. Right now, I’m working on a couple of songs, and Mr. Van Eps is helping me go through the stages of writing.”

Many musicians utilize the studio for hands-on experience. “There is lots of writing, lots of beat making, lots of music, and lots of understanding music,” Mr. Van Eps said.

Not to mention the state-of-the-art equipment that the studio offers: “It’s surprisingly professional,” Jeyaretnam said. “There is every mic you could possibly need, five or six computers and multiple virtual synthesizers capable of making an infinite variety of sounds,”

Kento Yamamoto ‘16, who has taken Van Eps’s courses in the studio, shared his favorite piece of equipment: “The midi keyboards translate signals from a keyboard into numerous different sounds like drum kits, equalizers and string instruments.” He added, “There are also mics, drum sets and amps that anyone can use to just jam out.”

How does producing become such a unique type of music-making? “Producers need to be trained, as they need exceptional ears and a good knowledge of music,” said Mr. Van Eps. “This is different [from] a performer who needs great performance skills, but not necessarily the same knowledge of music.”

Jeyaretnam agreed, saying, “When you’re playing in a live band, it’s based on feel—you work off of each other and play differently based on the mood of the music and the crowd. In producing, you record separately and everything is very exact. Sometimes you can lose that sense of feel.”

For those interested in taking a production course or music exemption—or for those who simply want to create sound—the studio is the place to be. Contained in one room is the potential for anyone to record songs and piece together music with the same resources as those used by some of the world’s greatest artists.