On March 25, 2015, the Aquila Theatre Acting Company performed Shakespeare’s The Tempest in the Hess Auditorium. The Aquila troupe, founded in London in 1991 by Peter Meineck, traveled through 70 towns and cities in the United States before finishing its tour at Deerfield Academy. 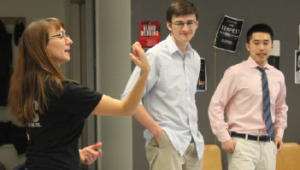 Catriona Hynds, who has not yet directed a Shakespeare play at Deerfield, commented, “I had already presented Aquila Theater in my previous position as Managing Director of a large arts organization, so I knew that Aquila toured polished, visceral, and slightly scaled down versions of Shakespearean plays.”

Not only did Aquila perform but it provided master classes and workshops. According to Hynds, “It was important that the production be used as a catalyst for a number of teaching opportunities in other departments too, such as the English Department.”

Members of the company held three acting workshops open to everyone on campus. Students had the opportunity to work with the company and speak to them about being working actors and about specific performances and directorial choices.

Hynds remarked, “It was wonderful to see people there who have never been in an acting class or performance before.”

General reactions to the production were positive. Hynds said, “I was very happy with the quality of the production. Of course, there are things I would have directed differently, but being a director, that is to be expected, right?”

Some students expressed disappointment in their preparation. Serena Ainslie ’16 commented, “I liked the performance, but I think it would have been helpful if every English class had been required to read the play beforehand.”

Nevertheless, The Tempest gave the community the chance to experience a work of live theater and interact with professional actors. As Hynds remarked, “Live theater is very important!”