You need to enable JavaScript to run this app.
A&E
Artist Of The Issue: Aaron Bronfman A Pyschedelic Revolution
Dane Scott '16 Spread Editor
April 15, 2015
No Comment

In the poem “American Sex Drugs and Rock and Roll in the Age of the Amphetamine Salt,” Aaron Bronfman ’15 wrote about the millennial generation in a startling, almost psychedelic style. 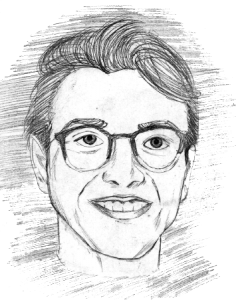 Inspired by revolutionary Beatnik writers like Allen Ginsberg, Bronfman thought about the “generation of artists that Ginsberg writes about in Howl, these intellectuals on the fringe of a movement that is deeply non-intellectual or zapped of any kind of lateral profundity,” as opposed to his own generation.

Last year, Bronfman’s poem won the Junior Declamation in his English class but did not move forward to the finals due to its controversial content. Now the piece has won the country’s most prestigious poetry prize—a gold medal in the Scholastic Art & Writing Awards. Over 300,000 pieces enter this competition, with less than the top .05% earning a Gold Medal. This accomplishment will send Bronfman to a ceremony at Carnegie Hall in June and to potential future success and recognition, especially considering that such iconic artists as Sylvia Plath, Andy Warhol and Truman Capote have received this award in the past.

Why does 18-year old New Yorker Aaron Bronfman write poetry? When asked if it’s cathartic or therapeutic, he said simply: “I like the way that words express ideas. Each word has its own strong connection to the denotations and connotations of the words around it. Poetry can tell a different narrative and have a different style and feeling. I guess I write to play with that—to organize my own thoughts in the most succinct way.”

According to Bronfman, he shares a desire for his work to feel “completely unspoiled by what other people need from me” like his own favorite writers, Kerouac and Rimbaud, artists who “take it on themselves to be unaffected by what people want from them.”

At Deerfield, Bronfman said he had “really great, supportive teachers” who provided “new resources, new books, new ideas.” One such English teacher, Joel Thomas-Adams, described Bronfman as “one of the most complex and talented writers [I’ve] seen at Deerfield in quite some time.”

Bronfman also remarked upon the luxury of seclusion at Deerfield, how “you can remove yourself from whatever craziness is at home, or whatever nonsense your friends are getting into,” and ultimately “seek out writing opportunities.”

Bronfman’s most frequent subjects include God—“the notion of God as an idea, God as a thing”—and fabrication—“the artificial fabrication of things like love, desire, enjoyment.”

So, is his work purely fictional, or are there autobiographical aspects as well? Bronfman shrugged and said, “Who I am is essentially a series of moments built up to now. I wrote from those. I take what I know.”

Finally, Bronfman explained that in order to create good art, “writers need to have a lot of something. Happiness, fear, piety, love—whatever it is, they have to feel it intensely,” he said. “Because you can’t be mundane.”

“The narcotic high is coming down.
Outside, rush my generation’s most brilliant minds
filled with the contents of textbooks.
They no longer drag themselves through negro streets,
but congregate in the millions for milligrams
Of bubblegum ecstasy.
Pink jumping beans bouncing
to the nocturne of bass speakers
and the acrid hiss of chemical dissolvent
rockin’ and rollin’ in the frontal lobe.
At least something is.”