As a new sophomore in the Greer, I was left wondering whether I’d been dropped into some kind of sick social experiment. I’d been briefed, of course, on the basic terminology: Leaving The Greer, Clapping People Out, The Senior Table. I’d been instructed not to leave with anyone, duh, because I was new and everyone would think I was a “slut.”

That particular golden nugget of advice didn’t turn out to matter in the slightest, though; I interacted with so few guys that night (and for the rest of sophomore year) that I started to wonder whether I’d made some unforgivable prep school fashion faux pas, or if maybe brunettes were considered demons on the east coast (there was an awful lot of blonde). This was my awkward and confusing introduction to Deerfield’s infamous Gender Divide. 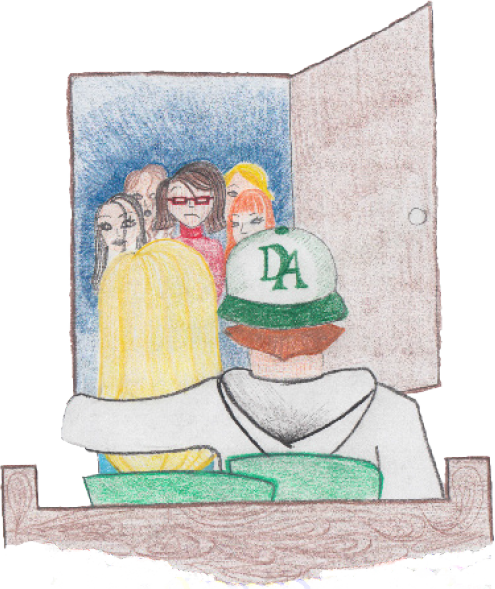 Given the amount of kvetching we do about Deerfield’s culture, it seems strange that no one has sat down and thoroughly analyzed our social abnormalities. My objective in doing this isn’t to assign blame or burn any teachers at the stake.

I’m also not trying to suggest that the gender divide is solely the fault of faculty and girls; I just haven’t experienced firsthand the thoughts that boys express about girls behind closed doors. Because I’m not a part of that culture, I don’t feel qualified to write about it. I just want to use my thoughts and experiences as a Deerfield girl to try to take a chip out of the enigmatic barrier that separates the sexes.

This task began as a protest against a completely inappropriate comment made to me by a faculty member. I’d heard some pretty outrageous stories of “slut-shaming” (shaming girls for keeping male company of any kind) by adults from my female classmates and I’d weathered several unpleasant run-ins of my own with Security. But receiving this treatment from a member of the faculty was the last straw.

It was a dark and stormy night on the Deerfield tundra. Boy X and I passed through the Athletic Center to avoid the subfreezing temperatures outside.

My phone started protesting as soon as we walked out of the Greer. “……????” inquired one text. “Um, what?” prodded another. Luckily, we were able to check into parietals without running into any more of my friends in the dorm, managing to avoid further scrutiny. “Uhhh…Shel?” someone asked through the door. “Who is that? Who’s in there with you? There’s a shoe in the door! Hello? Who’s there?”

We made it out of parietals still undetected. When I returned to sign in for curfew, no one besides the faculty member on duty and my concerned, interrupting neighbor knew I’d gotten parietals that night. One of the texters yelled across the common room, “Are you guys together?” Heads swiveled and eyes focused on me, studying, sizing up.

The faculty member looked up from his clipboard, smirking. “Just for the night,” he announced to the entire room, igniting a wave of laughter.

In the moment, I was too shocked to conjure up any kind of reaction. Later, I fumed alone in my room, exposed and humiliated by a faculty member whom I barely knew. I replayed the encounter over and over in my head. I felt powerless to confront him, but I had to do something. So I reached out to the senior girls, asking for their stories.

One night, Melanie Graciani and two of her friends decided to hang out in group parietals. When they arrived at the boys’ dorm, however, they were thrown for a loop. “The teacher on duty had the nerve to ask, ‘Who does she belong to, exactly?’” Melanie recounts. “Why do I have to belong to someone? We asked for group parietals for a reason. Not everyone who gets parietals is in a relationship or hooking up.”

Melanie felt degraded and humiliated (and rightfully so). A teacher, an adult who is supposed to help students like Melanie learn, grow and feel empowered, implied that her company was only good for one reason: hooking up with one of the boys. He referred to Melanie as a possession and didn’t even address her directly.

This interaction turned a fun, casual night of friends hanging out into a distinctly unpleasant experience. But, like me, Melanie didn’t feel as if confronting the teacher was an option. “I just brushed it off,” she explained. “I figured he was joking. But the joke made me uncomfortable, and my friends too.”

This fear of confrontation is a thread that runs through all the stories I’ve received from the girls in my class. A member of the faculty is, by definition, in a position of power over a student, especially if the student happens to be in that teacher’s class. When it is also taken into account that this is an older, professional adult talking to a teenager, that power is amplified. The result is that when a faculty member “slut-shames” a student, that student feels unable to address him or her directly about it. As a result, the adult faces no repercussions. In all likelihood, said faculty member probably never even realizes the effect that his or her words had on the student.

A common complaint among the girls I spoke to was that school rules and the personal beliefs of individual faculty members make it extremely difficult to have normal, healthy relationships at Deerfield. Parietals are considered not a right but a privilege, one that can be adjusted or revoked at any time and for any reason.

“Some teachers find cuddling too intimate,” said Madi Lyford, who has noticed in her own relationships that time spent with a significant other off campus is far more enjoyable than time oncampus. “I have a friend who was told to leave parietals because she and her boyfriend were cuddling when a teacher walked in. Their hands were even visible!”

How are guys and girls supposed to interact normally when something as harmless as cuddling is hypersexualized? No one seems to have a problem with students cuddling with dogs or friends of the same sex. Yet if a teacher finds a girl cuddling with a guy, she is liable to be kicked out of the dorm for her scandalous antics. It’s no wonder we have a gender divide; Melanie, Madi’s friend and I all faced shame and humiliation for attempting to carry on normal friendships and relationships with members of the opposite sex.

I don’t believe that any faculty member would deliberately objectify a girl. However, I think that it’s important for any teachers reading this to remember that adults at Deerfield wield a tremendous amount of power and influence over students. As the saying goes, “With great power comes great responsibility.” Students will likely not feel comfortable letting teachers know when they’ve overstepped, so it’s up to teachers to be aware of the impact of their comments.

A more insidious source of “slut-shaming” and, by extension, the gender divide, is the self-imposed female social hierarchy at Deerfield. A Deerfield girl’s value among other girls is too often determined not by who she is but by how she’s perceived by boys. She is frequently judged by her peers based on superficial traits such as her looks, clothes, socioeconomic status, and the (often resulting) level of interest boys take in her. Essentially, she’s evaluated as the sum of the guys she’s hooked up with. “For us, any hookup can improve or worsen our reputation,” one veteran of the system sums it up.

Because of this phenomenon, many girls only give their attention to boys who they consider to be level with or above them socially, which contributes to our gender divide by decimating potential boy-girl friendships and creating resentment between the sexes. It’s this cultural quirk that causes guys to perceive certain girls as thinking they’re better than everyone else. In reality, I think the girls who are most unwilling to interact with boys they consider “uncool” are actually the ones that are most insecure and therefore most desperately seek the admiration of other girls.

And what about the girls who don’t get with guys? When we base so much of each other’s social value on the opinions of boys, these girls are “othered.” A brilliant, creative and talented senior girl shared with me, “People talk about how Susie has hooked up with X, Y, and Z over the last three months, while Betty sits there and wonders if anyone will EVER want to hook up with her, which makes her feel insignificant, not pretty, lonely, etc.”

Are girls really marginalizing each other because they don’t hook up? And then calling each other sluts if they hook up with too many people? And in using sex to determine social status, we also push some girls to the other extreme of hooking up for attention. To some, it’s better to be notorious than a nobody.

And then there’s the player vs. slut predicament. “When a guy gets with a lot of girls, he’s often congratulated or praised,” Amelia Sawyers observed. “But a double standard occurs when girls are called sluts for getting with a lot of guys.” And males aren’t even the primary culprits; we females viciously perpetuate this double standard. Why do we hold our female classmates to a stricter standard than we expect from the boys?

Here’s my theory as to the psychology behind this: as a group, girls feel enormous pressure to adhere to social rules. When one girl breaks away and chooses to entirely disregard that pressure, she is dangerous to the group as a whole. We feel the need to gossip about her and shun her because if her behavior goes unpunished, our world will be turned upside down.

Imagine a world in which girls encourage each other to openly pursue whomever they want, whenever they want, simply because that’s what they want. Suddenly, all the years you spent being perfect are rendered completely pointless. That stellar reputation you built was a waste of time. That sweet and slightly nerdy guy from class? You know, the one you never talked to because, even though you harbored a secret thing for him, he wasn’t cool enough for you to be associated with? Yeah, now you realize that you missed out on getting to know someone really great for no reason at all. Because in this strange hypothetical world, girls don’t tear each other apart for the choices they make in their private lives.

Yes, ladies, our cage is safe. It’s familiar. We’ve spent our lives exploring it and memorizing it, and maybe sometimes nudging at the bars. And after living inside of it for as long as we have, freedom looks pretty scary.

But when it comes down to it, we are our own imprisoners. No one person has the power to transform a culture overnight: no matter the choices you make today, tomorrow will still hold a couple of bigots. But each of us has the ability to take control of our own actions.

Each of us can improve the position of girls at Deerfield and take a stab at the gender divide by simply deciding not to value each other based on the boys we let near us. Instead of viewing boys as social capital, we can choose to see them as people.

After all, Sweet Nerdy Guy has a dad who played catch with him and a mom who packed his Spiderman lunchbox. I’m sure they would argue that their life’s work deserves to be seen as the multidimensional human being that he is.