This article is my fifth in a series of game reviews I will be writing this year. The game I will discuss in this review is Dominion. 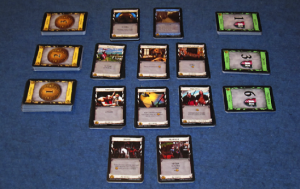 Dominion (2009) was the first deck-building game which generated widespread appeal. The core mechanic in a deck-building game is that players spend lower-valued cards to purchase gradually more powerful cards. However, unlike Monopoly, in which the money spent on purchasing properties goes to the bank, in Dominion, you retain these spent cards in your discard pile. When your active deck of cards is whittled down to zero, you shuffle all of the cards in your discard pile, including new cards you have purchased, to create your new active deck. As play progresses, your deck will include increasingly more valuable, interesting cards. Some will provide new mechanisms, powers, or victory points. As usual, the player with the most victory points wins! Would you enjoy this game? I hope the following review will help you decide.

1. Each player begins with an identical deck of ten cards: 7 Copper cards worth $1 each, and 3 Estate cards worth 1 Victory Point apiece.

2. There are 25 different sets of Kingdom cards. Players decide beforehand which 10 sets they wish to use in the game. The instructions provide some suggested collections of cards to use. Put these 10 stacks of sets within easy reach of the players, along with the stacks of money cards and property (Victory Point) cards.

A player’s entire turn consists of A, B, and C phases:

1. Action phase. Deal yourself 5 face-up cards from the top of your deck. Choose exactly 1 card, and play its “Action.” Some cards will allow you to draw more cards for your turn, play more actions, earn more $$, inflict something detrimental on your opponents, etc…

2. Buy phase. You may use any Copper, Silver, or Gold coin cards to purchase another card: an action card, kingdom card, or even another coin card.

3. Clean up phase. Take all of the cards you have just played, including any you have purchased, and place them in your discard pile.

4. When your deck of cards is depleted, just shuffle your discard pile to form your new deck. The A, B, and C phases should take very little time to complete (perhaps 30-60 seconds total).

5. When a certain number of Kingdom card decks have been exhausted, the game is over. The player with the most points from their Estate cards (1 Victory Point each), Duchy cards (3 VP each), and Province cards (6 VP each) wins.

So, what do I think about this game?

First of all, it is easy to learn. I want to emphasize this because the unfamiliar (for most people) mechanics of the game may tend to scare some people away. Within a couple of minutes of playing, you will understand the ABC actions, and will be at home with the flow of the game. Also, the rulebook is exceptionally clear, and filled with helpful examples.

Secondly, there are interesting choices during every turn. You might have been dealt numerous Action cards in your hand of five, and deciding which one to invoke is fun. While some actions might be more advantageous than others, there is never a bad choice. You will perform some kind of productive move every turn. Also, no memorization is necessary, as each card’s particular capability (action) is printed on the card using intuitive symbols and written explanations.

Third, there is a lot of strategy in the game. Should you purchase action (Kingdom) cards or property (Estate/Duchy/Province) cards? Certainly the property cards will provide Victory Points, but too many low-value properties might simply clog up your deck, leaving you fewer opportunities to play action cards or purchase more cards. If given the chance, should you “Trash” (eliminate from the game) your low-value money or property cards? Is it wise to actually pay $6 to purchase a Gold coin card which is only worth $3? Should you play negative Curse cards on your opponents, or spend your turns performing positive actions for yourself? I haven’t figured out the right balance of these various tactics, which is why my 10-year old son typically defeats me by a wide margin in this game. He thinks I am “going easy” on him, which I am not!

Fourth, the selection of the 10 decks to use makes the game very customizable. You can decide to use (or not) the negative Curse cards. There are actually 500 cards included in the base game! In the highly unlikely event that your experience with Dominion becomes stale, you can supplement the base game with expansions like Alchemy, Dark Ages, Cornucopia, Guilds, Hinterlands, Seaside, etc… These introduce more actions and scenarios, and easily mesh with the base game.

The only downside I see to Dominion is that it takes a little while to pack up the game after you’ve stopped playing. The cards all have their own slot in the packaging inside the box, and it can take some time to get all of the cards back into their designated homes. However, the extra few minutes you take to put the cards away properly will make the next game’s set-up quick and efficient.

In the 2014 version of the Dice Tower People’s Choice Awards, thousands of gamers ranked their top 100 games of all time. When the votes were weighted and tabulated, Dominion nailed down the award for the 4th best game—-ever! Yes, it’s that good. It’s fun, plays quickly, and can be mastered by kids even younger than the “+13” printed on the box. The game may be a bit more intriguing with three or four players, but will certainly provide plenty of enjoyment with just two.

The Boyden Library offers three-day loans for Dominion, and the many other top-notch board games (like People’s Choice # 3 Ticket to Ride and #1 Pandemic) in their collection. If you need assistance with playing Dominion, first check out some of the excellent video tutorials on youtube.com. If you still have questions, I would be delighted to help. Happy gaming!