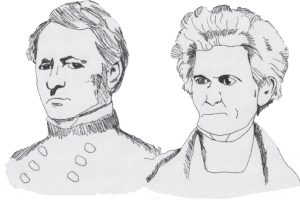 Born in 1782, John Caldwell Calhoun long served as a South Carolina senator. Over the course of his career, he became increasingly preoccupied with states’ rights and maintaining slavery.

Calhoun served as vice president from 1824 to 1832, under both James Monroe and Andrew Jackson. His extreme views and dissenting actions isolated him in the White House. Notably, in 1828, he composed the South Carolina Exposition and Protest, which asserted states’ rights to veto or nullify federal laws and paved the way for future secessionist arguments. Mr. Calhoun noted that John Calhoun’s work “shaped modern conservative thought.”

Mr. Calhoun commented, “John C. defended slavery, even at the cost of breaking the U.S., which I strongly disagree with.”

One trait did endure across generations, however. Mr. Calhoun added, “John C. was a great orator, and ranting is a family characteristic.” He then quipped, “As the Deerfield Young Republicans’ advisor, I am very proud of John C.’s work, but when I lead the Young Democrats, I am ashamed.”

Joseph Hooker, born in 1814, fought during the Seminole and Mexican-American Wars after graduating from West Point. He is best known for serving as a major general during the Civil War. He commanded units under George McClellan, rallying the Army of the Potomac during the Battle of Williamsburg and Seven Days Battles. Simultaneously, however, he drank, gambled, and even popularized the term “hooker.”

Ainslie elucidated, “Even though Hooker was a great soldier, he did have a ‘dark side.’ He was known for having prostitutes at his parties; and when he and his men would conquer southern towns, the southern belles would follow him and his men from one camp to another. Apparently, the term ‘hooker’ had already been created because prostitutes would hang out around ports, where fish were ‘hooked,’ but Hooker was the one who made the term popular.”

In January 1863, President Lincoln promoted Hooker to Army of the Potomac Commander. Appreciated by his subordinates, the general developed medical aid systems, rations, and furlough lengths. He also established an amnesty policy for deserters. But after a stunning defeat at the Battle of Chancellorsville, Hooker resigned, then assisted in the Western theater and Atlanta campaigns.

Ainslie remarked upon her great, great, great uncle’s career, “Hooker played a crucial role in American history because of his contributions to the Army of the Potomac. He improved the medical care and food supply. He didn’t just win battles, but he helped to improve the lives of soldiers who were fighting for a worthy cause. Hooker also led Lincoln’s funeral procession.”