Recently, a group of students eager to improve school spirit created the Deerfield Athletic Association (DAA). While many community members voice their concerns regarding Deerfield sports and support in the safety of their own dorm rooms, sans faculty scrutiny, this handful of students have gone public. According to Charlie Carpenter ’16, who founded the association in early December, the group seeks to “preserve and improve the traditions of Deerfield athletics.” 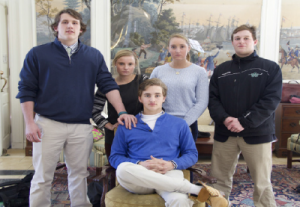 Carpenter elaborated, “We plans events, organize themes for home games and fan buses for away ones. Recently, we proposed an idea to have both boys and girls lacrosse play Choate under the lights on April 11th with the goal in mind of bringing the community together, but unfortunately this idea could not become a reality due to logistical issues. Finally, we sold t-shirts and took a small profit so we can buy rally towels for upcoming home games.”

Earlier this winter, the group organized a popular trip to Choate for a boys’ varsity hockey game. When asked how the support impacted the team, forward Brendan O’Connell ‘16 said, “It honestly felt like a home game. Having that many people come out to watch makes me not only want to play for my team but also everyone that came out to support us.”

Carpenter, Emerson Logie ’16, Ezekiel Emerson ’16, Katherine Goguen ’16, Elizabeth Growney ’16 and Maggie Savage ’15 comprise the organization’s board. Each of them letters in at least two sports and shares Carpenter’s infectious Big Green pride. “People here are always talking about how school spirit is down,” said Savage, who is also a cheerleader, “so we wanted to have an answer for them. The association isn’t just about fan buses and stadium lights. It’s also about working back toward a Deerfield where it’s normal to get rowdy and support our teams – win or lose.”

Many students and faculty members hope that the DAA will rally students and ameliorate community spirit. Drew Philie ’09, the association’s advisor, believes that the club “Will spark a change in the way upcoming games are announced, how scores are reported, and how different athletes will be recognized for their play by their peers.”