You need to enable JavaScript to run this app.
News
Depression at Deerfield
Lucy Binswanger '17 Staff Writer
January 28, 2015
No Comments

In recent years, depression has received national attention, especially when referring to the teenage demographic. All teens and adolescents occasionally feel “depressed” or “under the weather,” and at Deerfield, the topic seems especially relevant during the winter months. 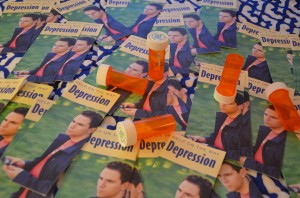 Depression is a national phenomenon.

“Depression at Deerfield is typically manifested by kids who have a number of different symptoms,” Director of Medical Services Thomas Hagamen stated. “These typically include increased sadness, difficulty concentrating, decreased enjoyment and sometimes dark thoughts about death and self—injury. At Deerfield, depression is often brought on by the stress that Deerfield life can bring. And so schools like Deerfield–competitive, challenging, independent–often see a higher level of depression than your average school.”

Recognizing mild depression can be very tricky, because victims may appear to be perfectly fine externally.

“In this particular population,” psychologist Sheila Fritz explained, “students [with depression] are able to maintain their grades because it’s a number-one priority. We are high achievers and perfectionists by nature.” But, she added, “it doesn’t mean that when your grades are good and teachers are seeing you smiling and interacting with people in class or outside walking in the community you can’t be depressed.”

Although more people are becoming open to talking about depression, there may be some negative connotations and stereotypes associated with the condition. One anonymous student stated, “I didn’t feel like it was something I could just say to anyone. I couldn’t tell any of my friends—you want people to like you at DA, and if you are open about it, people will not want to hang out with you. Meanwhile everyone was saying I was the person they could count on to always be smiling, happy and bubbly.”

Although depression can be a difficult disease to combat, the Health Center has methods to help students. Dr. Hagamen explained, “Treatment for depression typically involves working with a mental health professional in some form of therapy, usually talk therapy for some time. For severe depression we recommend augmenting this therapy with psychiatric consultment and specifically anti-depression medication.”

The issue of depression can be difficult to face for many students who have depression or those with friends who suffer from it.

Dr. Hagamen offers some advice: “We certainly recommend that if you have a friend who is depressed that you encourage them to come to the Health Center and meet one of the health counselors or peer counselors. The most important thing is that you do something.”

“Being depressed is not something to be ashamed of,” Dr. Hagamen said. “It does not mean there is anything wrong with you, it is something for which there is very good treatment.”

“If you are feeling depressed, there is treatment which can make you feel better,” he concluded. “And remember to reach out for help.”