The early application process is a highly discussed and, more often than not, raw subject for those involved. In an anonymous Scroll Poll, a member of the class of 2015 who was deferred, commented, “It is a very sensitive time. The emphasis and pressure students put on one another should—and I hope will—be diminished.” 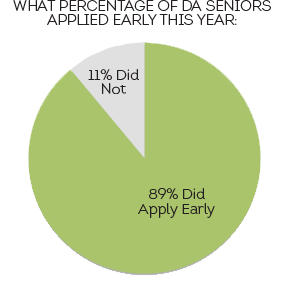 Many seniors opt to partake in the early application process if they possess a clear preference for either a single institution for early decision—which is binding—or for a handful of institutions for early action—which is non-binding. In fact, Director of College Advising Mark Spencer, reported, “Early application rates have been over 80% for the senior class recently. This year, 89% of the class filed an early application (ED or EA) with many also applying to multiple EA schools.”

Of the 86 anonymous Scroll Poll participants, 37 seniors stated that they applied early decision and 33 applied early action. Of the 86 who applied early, 47 were accepted, 29 were deferred and 4 were rejected from either their first- or second-choice schools. Only 6 seniors of the 86 who took the poll did not apply early.

The most attractive benefits of applying early seems to be the savings in time, energy and stress—as well as the security that comes with early acceptance brings.

Mr. Spencer explained, “If you are admitted ED, the process is over in December, which many students see as an advantage. Applying EA doesn’t necessarily increase your chances of admission, and many EA colleges defer a lot of the applicant pool to the regular round. If a student is admitted EA, it means s/he may be finished applying or may choose to file many fewer applications overall.”

But there are drawbacks to applying early as well. Pressure to decide on a single school for a binding early decision can sometimes be a deterring factor and a source of stress.

A senior who was accepted early to Princeton—in a non-binding decision— said, “I think that the early application process can be an extremely helpful tool when used correctly. However, it can also be a major cause of stress. I saw many of my classmates fall in love with a school, not seriously consider other options, only to not be accepted by that school.”

Mr. Spencer concurred: “The only potential disadvantage to an early application is the sense of putting all of your hope into one single college; a deferral or rejection can be very disheartening. The good news is that there are many other wonderful colleges in the country and the world, and seniors have their lists prepared of places to apply if Plan A doesn’t work out.”

Another possible con to applying early is catching “senioritis,” which can sometimes precipitate a substantial decrease in motivation to work, leading to a decline in grades, which might result in the institution’s rescinding their offer of admission. 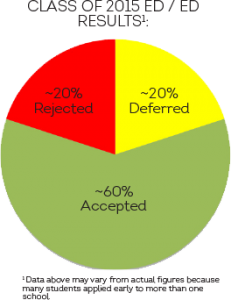 James Chung ’15, who was accepted to Yale, early action, noted, “Senioritis really depends on the individual. Although I admit that I see some friends putting less effort into class work, I also see many students taking this time of necessary relief to pursue what they enjoy and cherish the last moments of high school.”

In addition, the release of decisions creates a brutal environment for all those who applied. One anonymous poll contributor said, “People are welcome to willingly share information about their application, but personal questions that verge on… rude do not alleviate the anxiety that pervades the community during the latter half of the term. I have found a lack of respect and concern for others and their feelings about applying to college.”

With 29 of 86 Scroll Poll participants deferred—almost 34% of the respondents—the number of those deferred seems significant, especially when compared to the diminutive 4 rejections.

Mr. Spencer offered some insight on this: “There does seem to be a trend by some colleges to defer rather than deny students. I think application pools have grown quite strong and with good college counseling the applications are true contenders, but the number of beds on college campuses remains the same, making the process that much more competitive and leaving admission officers with even more difficult decisions. The rise in deferrals is a ‘wait and see’ approach, so that applicants can be compared against the whole pool, which nowadays they know is likely to be quite large and diverse. It also gives colleges the ability to assess interest by seeing how students respond to the deferral decision—do they stay interested or move on? That said, I don’t think the number of deferrals we had this fall was remarkable, especially as compared to the number of acceptances.”

Over the past two years, the College Advising Office has seen dramatic changes in staff and procedures. One of the changes included the class of 2016’s receiving college advisor assignments much earlier in the fall of junior year, when in past years students were given their advisor assignments in the winter. In addition, junior questionnaires have been distributed earlier, and advisors have been meeting more frequently with students.

Mr. Spencer explained the rationale: “We assigned advisors earlier this year to respond to the growing concerns that students and parents felt they were being left behind in the process or were finding out key information about aspects of the process too late to make substantive changes or decisions. We also felt that frequent and informed communication with our juniors could help lessen anxiety and stress in the process. By being more open to questions and conversations earlier on, we hope to alleviate fears and concerns and help students better plan and take personal control of the process and all that lies ahead with it.”

Mr. Spencer added, “One of the reasons we are also working with juniors earlier is to get to know them better to assist with this goal of finding the best fit.” 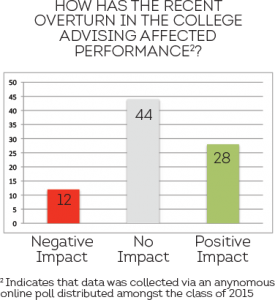 In the Scroll Poll, seniors were asked, “On a scale of 1 to 3, how much do you think the recent overturn of the office has impacted this year’s results?” Answering 2 asserted that the transition had not influenced the process this year, and 46 of 86 participants chose this option. Twenty-eight seniors answered with a 1, feeling that the transition had positively influenced the process; and 12 seniors answered with a 3, indicating that the transition had had a negative effect. Thus it can be inferred from the statistics that the general sentiment of the senior class participants toward the College Advising Office and the early application process this year is one of general contentment.

Further, 78 seniors responded “yes” to the question of whether the grade has done well in general.

Mr. Spencer echoed this outlook, saying, “I feel one responder to the Scroll survey put it well when [he or she] said, ‘It isn’t just the College Advising Office. Overall the senior class this year is incredibly talented. For the most part everyone has high GPAs, good test scores, lots of extra extracurriculars, and for the most part are really good kids. With this said there is no guarantee with the college process. Even though not everyone got the news they wanted, everyone is doing very well in the college process and should be relatively happy.’”