This article is my fourth in a series of game reviews I will be writing this year. The game I will discuss in this review is Pandemic.

Anyone who has followed world news knows how ubiquitous the topic of Ebola has been in 2014. Field reports from West Africa may sound alarming, but a crisis in a distant Third World corner of the globe may seem to have little bearing on our day-to-day lives here in the US. Until it does. This fall, those suffering from this horrible plague became patients inside our borders, in Atlanta, Dallas, NY City, and Maine. When the disease is not properly contained, it can—-and has—-spread. Decisions regarding strategies for containment become critical. Timing is important. Various agencies need to seamlessly work together and pool resources. Even thousands of miles away from the epicenter of these crises, one’s blood pressure rises just a bit…. 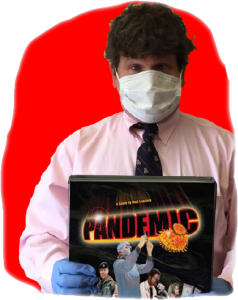 Perhaps we don’t need a board game to simulate the tension of a worldwide epidemic. Some might even argue that the topic is a bit too taboo to be packaged as family entertainment. But for those who want to try to save humankind from being overrun by a gauntlet of colored disease cubes, the Boyden Library’s game Pandemic (2009) may provide the right medicine for you.

The major difference that Pandemic may present to the new board gamer is not necessarily the theme. It is cooperative nature of the game. All players work together against the game. Everyone wins, or everyone loses. If all players combine forces and play a tactical, intelligent game, the group might find cures for the diseases and win. If the players don’t work as a cohesive, resourceful group, they will surely lose. Would you enjoy this game? I hope the following review will help you decide.

1. Each player is given a Role Card, which represents the character he or she will be during the game. Each character has different unique abilities. For example, the Scientist can cure a disease by collecting four (rather than five) city cards of the same disease color.

2. Start the Infection Rate Tracker on the lowest level. Turn over the first 9 cards in the Infection Deck to see which cities begin with diseases. Disease cubes are placed on the game board on these cities.

3. Players are given cards (depending on the number of players) from the Player Deck. After these have been distributed, Epidemic Cards are shuffled into the remaining cards in the Player Deck.

4. All player pawns fittingly begin the game in Atlanta, the world headquarters of the Center for Disease Control.

1. On a player’s turn, he may perform up to 4 actions. Actions may be performed multiple times, if he wishes. Potential actions include: drive/fly/ferry to an adjacent city, charter a special flight to a non-adjacent city, move from one research station to another, build a research station, treat a disease, share knowledge (cards) with other players, or discover a cure for a particular disease. Some actions require certain Player Cards to be played, or may be easier to be performed by utilizing the special abilities of your fellow players.

2. Two cards are then drawn from the Player Deck. Most of these cards will help you in your quest. However, occasionally you will draw an Epidemic Card! If this happens, the infection rate increases and infections spread. Infections can trigger more infections, and chain reaction outbreaks can occur.

My thoughts on the game:

While there are other cooperative games on the market, Pandemic was the first of its type to make a big splash in the game board world. Working together toward a common goal can be a refreshing change from the “Take that!” nature of many traditional competitive games. Whether you play with your Player Cards “up” for your teammates to see, or choose to keep this information somewhat hidden, cooperation is vital. As long as you aren’t playing with a bossy teammate who wants to act as the field general of this disease-fighting operation, it can be refreshing to pool input in a way that empowers each teammate to decide what he/she thinks are the optimal maneuvers. Pandemic can also be played solo, with one person in charge of as many characters as he would like.

The game is hard. I must confess that I have never beaten this game. That said, I typically want to play again right away, to see if I can employ any new strategies I’ve developed. This time if I focus on XYZ rather than ABC, might I save the world? For those expecting an ego boost from Pandemic, look elsewhere. For me, the difficulty is a huge plus, but I can understand if some people would prefer a gentler path to victory. For those brilliant tacticians who find the game too easy, the difficulty can be ramped up by starting with more infected cities, or by inserting more Epidemic Cards into the Player Deck.

Is the game educational? Certainly no knowledge of infectious diseases is required, nor will playing the game provide any insights into their clinical treatment. However, a heightened understanding of world geography and names of cities provides a modest educational by-product.

Will I become bored after playing Pandemic a few times? Some boredom might set in after a few dozen plays, but it will likely never be an issue. The game will be different depending on which cities are initially infected, the people with whom you play, the roles/abilities each player takes on, the number of Epidemic Cards used, and the actions the players take on each turn. Decisions have consequences! While the actions each player takes may echo the actions taken in another turn, the inevitable global spread of the diseases tends to make even the most commonplace action seem critical. Also, like many successful board games today, the publisher has created numerous expansions which add more complexity to the game experience. Versions like On the Brink, In the Lab, The Cure, and Contagion will breath new life into a well-worn copy of Pandemic.

As my review suggests, I think Pandemic is a terrific game. Whether playing solo or with three teammates, the game combines the spirit of cooperation with an inherently tense theme. In 2009, Pandemic nailed down a coveted Spiel des Jahres (Game of the Year) finalist nomination, and it has won many others awards from online gaming websites to organizations in the Netherlands, Italy, and Australia. It has held up well to scrutiny, and is now available on the shelves of retail stores like Target and Barnes & Noble. Millions of amateur disease fighters can’t be wrong!

The Boyden Library offers three-day loans for Pandemic, and the many other top-notch board games in their collection. If you need assistance with playing Pandemic, first check out some of the excellent video tutorials on youtube.com. If you still have questions, I would be delighted to help. Happy gaming!