You need to enable JavaScript to run this app.
News
Making A Change
Bella Hutchins '16 Associate Editor
December 17, 2014
No Comment

Sunday, December 7, at 3 p.m, in the Greer marked an initiation of change for students here at Deerfield. Matt Morrow ‘15 and Tarek Deida ‘15 organized a meeting solely for students to share stories and insights on student culture.

Inspiration for the idea first came after Thanksgiving Break when English teacher Eve Goldenberg chose to read some of the responses that students in her class wrote on their fall term exam pertaining to race at Deerfield. Ms. Goldenberg then spoke about the lack of action from the majority in the school—white males—concerning racial issues on campus. 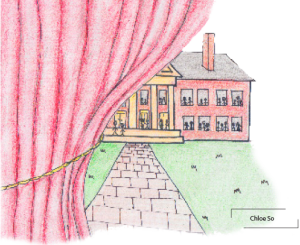 “I thought she was dead right,” said Morrow, who was then determined to pursue the issue.

When he asked Deida how difficult it was to be a black student on campus, Deida replied, “Do you want the answer that I tell people, or do you want the truth?” Deida continued to tell Morrow that sometimes he would wake up and ask himself, “Why am I black?”

“That was all I needed to hear,” said Morrow. “I was pissed.”

Morrow and Deida then came up with the idea to host the talk in the Greer, in order to facilitate a place “where students weren’t afraid to tell the truth about their experiences here at Deerfield.”

“We believed truth was the first step,” said Deida.

The meeting, which lasted an hour and a half, started off with a bit of hesitance from students, with only two or three people willing to share stories. However, as the meeting went on, the number of people raising their hands to give instances or express insights continued to increase.

Among the students who spoke up was Valentina Connell ’16, who didn’t originally intend to share her story, but felt that she would be frustrated with herself if she didn’t. Connell stated, “If there was at least one person in the audience who identified with my story and felt less alone, then I’m happy.”

Additionally, Katie Livingston ‘15 spoke up in the meeting “just to reach out to younger students in the community, [to tell them] that there are other people dealing with what they may be dealing with.”

Many students saw the meeting as an opportunity to ignite change in our community, the first step being simply a conversation where people are willing to listen.

The diversity among the students who attended the meeting was proof that students of all different races and personalities at Deerfield want to make change, rather than simply a select few.

Ali Barber ‘15 asserted, “What was most important about this meeting was the fact that many students from different backgrounds and groups on campus came to listen and share.”

“Not enough people know how tough it is for other students,” said Morrow, who is encouraging students on campus to voice their opinions more often.

Deida added that the “assumption mentality” on campus that causes students to assume things about their peers whom they may not know well “arose from the fear of questions.”

Morrow also acknowledged the fear factor that the Deerfield atmosphere may represent to students who aren’t able to speak up about issues, saying “We need to try and get rid of the fear at Deerfield.”

This meeting was the first step. Connell stated, “I believe the meeting itself was change.” She then added, “The biggest changes are within people, and listening to stories is a catalyst for these changes.” As Deida said, “There can be no rule put enforce that we have to respect one another. That sense of respect has to come from us.” The willingness of the student body to host and attend this first meeting is a starting spot, but it seems the community will continue to steadily move forward. Already, representatives of the class of 2016 are planning another one of these discussions, geared specifically to the junior class, so that more issues can be touched on in an even more intimate and personal setting. We are on our way.