You need to enable JavaScript to run this app.
Features
Balls Of Fury
Bella Hutchins '16 Associate Editor
December 17, 2014
No Comment

Almost every dorm on campus seems to have a ping-pong table stored in the basement or common room since the beginning of time.

In many dorms, the tables aren’t put to use very often, but this fall, Barton and DeNunzio changed that. 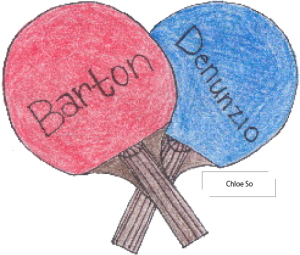 Finnegan was able to gather 32 boys from Barton to agree to compete in the tournament after hearing two DeNunzio boys “talking trash” about the Barton ping-pong players. “I wanted to challenge them, make them put their money where their mouth is,” said Finnegan.

According to Finnegan, Barton is “very deep as a dorm,” and also has a key asset: their #1 seed, Sam Vigneault, who, in his childhood, was the Quebec ping-pong champion for his age group. Consequently, Barton ultimately prevailed in the tournament, winning 4-0 in matches and causing the DeNunzio squad to flee the scene before the start of the fifth match.

Explaining the loss, Bronfman said, “My horoscope wasn’t very good that day, so our qi was compromised at the pistol. Other factors included the sub-par conditions (a warped table and a net hung shamefully low) in tandem with our questionable skill level.”

While Bronfman, who learned to play ping-pong last year during SYA China, acts as a “spiritual leader” for the DeNunzio Ping-Pong team, the official captain is Charlie Carpenter ’16. Carpenter’s analysis: “Barton had some phenomenal players and they were clearly better.”

Despite the tough loss, DeNunzio has plans to challenge Barton again in the near future. And the Barton boys are prepared to accept this challenge, confident of another win.