Mr. Keller has also written reviews about Dixit and Settlers of Catan.

In most board games that pit players against each other, it is natural to study the decisions of other players to gauge their strategies. In Ticket to Ride, you often won’t know your opponents’ strategies or what their goals are. It is a game with simple mechanics and imperfect information. And trains. Lots of trains! 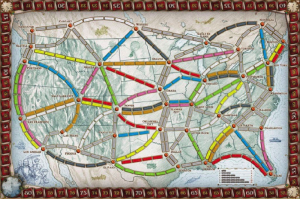 A short, simplified summary of the game play:

1. The game board features a map of the USA and southern Canada, with colored train routes connecting various cities.

2. Each player picks a color, and is equipped with 45 corresponding plastic trains. Players draw from a deck of “Destination Tickets,” which are routes between cities on the map. A ticket might read, “Los Angeles/Chicago: 16.” This means that if the player can create, with HIS trains, any route connecting Los Angeles and Chicago, he would earn 16 points at the game’s end. Conversely, if he can’t fulfill this Destination Ticket, he would lose 16 points.

3. Players draw different colored Train Cards on their turn, hoping to amass enough cards to submit in exchange for “claiming the route” between cities. For example, it would take six red Train Cards to claim the route between Miami and New Orleans. Players generate victory points for routes they claim. In most cases only one set (route) of tracks connects two cities, but in some rare circumstances, two routes exist.

4. As players fulfill Destination Tickets, they can draw more if they wish. Additionally, bonus points are awarded to the player with the longest continuous path of trains.

5. At the end of the game, points gained from fulfilled Destination Tickets are added to the points earned by claiming routes. The player with the most points wins.

Why has Ticket to Ride been such a worldwide smashing success?

For starters, it is easy to teach. Within five minutes of beginning play, even a newcomer will understand all that is necessary to compete for victory. Claiming routes between cities, and then stringing together various routes to fulfill Destination Tickets makes for a pretty straightforward, intuitive system. Drawing Train Cards into your hand is a simple mechanism, and collecting sets of “like” trains should be familiar to anyone who has played card games.

Next, there is the mystery attempting to figure out what your opponents are trying to achieve. Did Jane claim the Portland to Salt Lake City route because she ultimately wants to connect it to Denver? Or Las Vegas? Or Helena? Or was she just trying to nail down some points by claiming a route? Or is she trying to block somebody else? Since Destination Tickets are kept private, nobody really knows what each player is striving toward until the conclusion of the game.

Third, in some games, it is pretty clear which player will win well before the end of the game. However, this is not so in Ticket to Ride. With significant Destination Ticket points to be gained or lost, players can easily make up lost ground during the final tabulations. Sometimes achieving the longest continuous path provides the key to eking out a victory.

Fourth, while the base game of Ticket to Ride will provide years worth of fun, there are other versions on the market, including Ticket to Ride Europe, Marklin (Germany), and Nordic Countries. Additionally, one can purchase expansions which enable the base game to be played with maps of The Netherlands, Switzerland, Asia, Africa, the USSR, Canada, the London Underground and other parts of the world.

Are there any downsides to the game? The only one which comes to mind is that there isn’t a huge menu of action options on each player’s turn. Actions are limited to draw Train Cards, claim a route, or draw Destination Tickets. Players cannot proceed up levels, acquire special powers, or aspire to invoke any alternatives to the core rules. For experienced gamers who prefer a more complicated, “heavy” experience, they might find Ticket to Ride to be a little “light.”

In 2013, The Dice Tower, perhaps the most highly respected board-game review organization, published a video discussion of “The Top Ten Essential Games Every Gamer Should Own.” While the three panelists differed in their rankings, when their ratings were combined into an aggregate score, Ticket to Ride nailed down the #1 rank. Many decades ago, the game most people owned and played was Monopoly. Today’s Monopoly could very well be Ticket to Ride. Hop on and give it a try!

The Boyden Library offers three-day loans for Ticket to Ride, and the many other top-notch board games in their collection. If you need assistance with playing Ticket to Ride, first check out some of the excellent video tutorials on youtube.com. If you still have questions, I would be delighted to help. Happy gaming!

We have a question regarding Ticket To Ride. Can part of one train be used to fulfill two different destination routes? For example, my clever son completed his San Francisco-Atlanta “Destination Ticket” (17 bonus pts.). He then drew the Portland-Nashville “Destination Ticket” (also 17 bonus points) and decided this would be a cinch since he had already completed San Francisco to Atlanta. He simply added another 5 train cars, from San Francisco to Portland, and claimed another 17 bonus points for the Portland-Nashville ticket! I think he should not be allowed to do this, but should complete a whole separate train between Portland and Nashville to earn those 17 additional points. I may be reading the rules too quickly, but I don’t see where the rules explicitly address this one way or the other. Do you know if there is an “official” rule on this? Or is it up to people to determine this in their own house rules? Thanks for any tips you have!