Most students receive their acceptances to Deerfield Academy in the mail. Julian O’Donnell, currently a freshman, found out “in a hut in Nepal at 10,000 feet.” 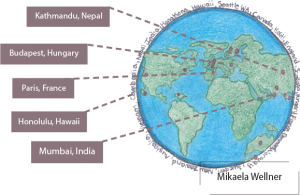 After their yearlong sabbatical trip, Philosophy and Religion teacher Michael O’Donnell, English teacher Sonja O’Donnell and their son Julian ’18, are full of stories and lessons learned. From Oxford, England, to Melbourne, to Kathmandu, they covered 17 countries during their circumnavigation of the globe, which Mrs. O’Donnell said “was a year on the study of contrasts.”

Oxford University was their first stop. Mr. O’Donnell reminisces, “One of the things I liked the most was that we got to take classes at Oxford, and it was fun to be there for 10 weeks, to absorb the culture, and also to study the philosophy of physics. Which is something I don’t do here, in no way do I specialize in it. But it gave me the chance to study something I like, to be a student again.”

The reason behind their thrill-seeking exploration of the world was “to break the cycle,” Mrs. O’Donnell explained. “It was time to step out of the relentless pattern of existence.” After 15 years at Deerfield, the O’Donnells wanted to trade their predictable daily routine for the chance to satisfy their intellectual curiosity.

Escaping from the boarding school schedule was “invigorating,” Mr. O’Donnell said. “The eight months we spent on the road felt like years in ‘Deerfield time’—and now it’s almost Thanksgiving, but it feels like I’ve been here 10 minutes, whereas, weirdly, that year felt very stretched out in a good way. It was great to have that time for the three of us to spend together.”

While on sabbatical, they trekked to Mount Everest’s base camp, a feat that Julian O’Donnell is the youngest person to have ever accomplished.

Mrs. O’Donnell said of that climb, “That was a great physical, spiritual, but also mental challenge.”

Another adventure was helping the impoverished people of Haiti, the poorest country in the western hemisphere, which “taught us empathy and what it is to walk in another’s shoes,” said Mrs. O’Donnell. “The facts learned on the trip were really important, but what really is valuable to me as a teacher is having practiced mindfulness for an entire year,” she said.

Although away from Deerfield, the O’Donnells kept in touch with the school. Mr. O’Donnell explained, “We connected with alumni, parents and former faculty in 10 or 11 countries. So it was kind of fun to be connected to Deerfield throughout the entire trip.”

Julian O’Donnell did some of his schoolwork over Skype with a tutor. Now at Deerfield, O’Donnell can fall into the typical student routine, but he is able to apply lessons he learned while away. On the impact the year had on him, he said, “I definitely think about things more. Every day was different on the trip, and every day I would experience something new and awesome. I learned to appreciate the connections I’ve made with people, to be present and experience everything.”

Regarding how her own teaching style has changed since her adventure, Mrs. O’Donnell said, “I feel calmer and more patient. I’m more possessed of my skills, and what I think students need. What I want to do is all that I saw in my head. A sense of mindfulness is what I’m trying to bring to my teaching. Be prepared to lose your sense of normalcy because the world is a wild, crazy, amazing, vast place.”

After such a momentous year of traveling, the O’Donnells concluded, “We are deeply grateful to Deerfield, the administration and Mr. Jacobs for allowing us to share this enriching experience.”

For more details on their journey: check out their blog: http://theother3corners.org.