You need to enable JavaScript to run this app.
A&E
Meet The Mellow-D’s
Maggie Yin '16 Staff Writer
November 12, 2014
No Comments

Tarek: We start, we do warm-ups, and then 15 minutes later, Tomas shows up. After that, Will gives a little lecture about not being late. Then we start singing, but everyone is singing whatever they want. Juan starts busting out Beyoncé, and we have to calm Juan down. Then we actually start.. 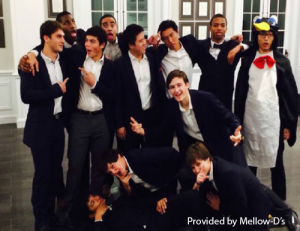 The Mellow-D’S strike a pose after a Parents Weekend performance.

Your Favorite Part About Being A Mellow-D?

Henry: Singing without instruments makes me listen more to everyone, instead of just focusing on what I’m doing.

If You Were Stranded On An Island, What Three Things Would You Take With You?

Taro: A pot, a Nutrigrain bar and a water bottle.

Tomas: A piano, a very attractive woman and a boat.

How Did You Get Into Singing?

Ken: Throughout middle school I was really jealous of my brother, so I started singing.

Will Darling: I started singing at a very young age, I think, simply, because I liked to perform. Actually no, that’s a lie; I actually started singing to meet girls . . . But over time that grew into a love of music, of the emotions that can be conveyed through it.

What Is Your Happy Place?

Will Blauvelt: On a medium-sized sailboat going top speed and skimming the water with my hand.

Michael: I’m happiest playing music, whether it’s on stage or in a practice room.

What Is One Dream You Have For The Future?

Juan: I want to be a singer.

Taro: To keep dancing as long as I can.

What Is Your Spirit Animal?

Michael: A dog. I generally get excited easily when I see something cool.

Matt: A puppy, really friendly and outgoing and energetic.

The Mellow-DS strike a pose after a Parents Weekend performance.

What Is A Unique/Weird Fact About Yourself?

Adam: I was born with six fingers on one hand. [The sixth] was removed. The doctor, when he removed it, asked my mom if she wanted to save it.

Vishawn: I am sort of obsessed with Beyoncé and I can probably finish a whole tray of vegan brownies all by myself.

Will Darling: Be happy with yourself and don’t define your life on someone else’s terms. It took me a while to realize that. But when I did, my life got so much easier because I could focus on what really made me happy.

Liam: It’s good to be foolish; it’s good to try things and always stay hungry and never be satisfied, and to keep on pursuing your dreams.

Seniors, What Will You Miss Most About Deerfield?

Matt: There’s just something nice about the community here, like walking down Albany Road and saying “hi” to people; I’m going to miss that.

Will Darling: I can’t choose! Every person on campus, the land, the River-but I’m gonna miss the Mellow-D’s a lot. It wasn’t until the Mellow-D’s performed at Revisit Day that I thought, “I have to come here and be a part of that.” It’s been more than just fun, it has helped me grow as a person, and I’m gonna miss the guys and the singing and the music and the happiness that we try to bring to the community.

1. Most likely to be late to every rehearsal: Tomas.

2. Most likely to flirt with one of the Rhapso-D’s: Ken.

3. Most likely to break out into song in the Greer: Juan.

4. Most likely to be in the practice rooms on a Friday night: Michael.