You need to enable JavaScript to run this app.
News
A Plan To Prevent Outbreaks
Lucy Binswanger '17 Staff Writer
November 12, 2014
No Comment

The recent Ebola epidemic has created widespread panic across the globe, the virus having already infected an estimated 13,450 in West Africa and nine in the United States. Drastic precautions have been taken in order to control the transmission of the deadly virus. 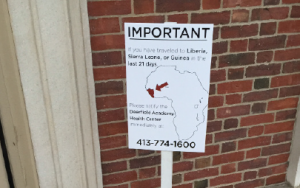 Although not nearly to the same extreme, Deerfield is going through an outbreak of its own: Hand, Foot, and Mouth Disease (HFMD). Both students and parents received emails about the highly contagious disease; however, this is not the only nor the most dangerous epidemic that has occurred at DA.

In the spring of 2009, there was an outbreak that warranted much more concern at Deerfield: swine flu.

“It was unclear about how institutions could handle a major threat like that,” said Dr. Hagamen, Director of Medical Services. “New strains of flu could have a high infection and death rate. It was feared that that the flu epidemic might be similar to the last swine flu epidemic in 1918, when boarding schools had people die.”

Early into the span of the epidemic that spring, Parents Weekend was canceled in order to prevent any further spreading of the disease. Dr. Hagamen went on to explain that it was soon clear that swine flu posed no major threat at Deerfield.

But, in order to control a major disease outbreak such as swine flu, the correct planning and execution was required. It included the notion that if any students were to be infected and lived within three hours of the school, they were to be sent home. There was also room in the Health Center for students who contracted the illness, which was full for about two weeks due to the high infection rate.

Compared to an influenza outbreak, HFMD seems quite mild as only an estimated 20 to 30 students have been infected. After the first email from Dr. Hagamen was sent out, which included details on the virus’s appearance at Deerfield, panic ensued within the student body. To avoid contracting the illness, many decided not to attend the long-awaited Sadie’s dance.

“People are concerned, because everybody here is in such close proximity,” explained Chase Swinerton ’15. “We all go to the same locker rooms, the same dining hall, and we touch all the same surfaces. Because of that, boarding schools are a breeding ground for disease. We’re packed in here like sardines.”

But students are not simply worried about missing class, sports, or other social obligations when it comes to contracting an illness. There is another specter.

“In my opinion those actions are mostly socially driven,” Science Department Chair Dr. Dennis Cullinane stated. “I think people feel that as soon as you become sick, your name gets out there as being infected. It’s almost like a scarlet letter. When people know you have the illness [they] could make fun of you or avoid you for fear of getting sick as well.”

Other students were not deterred by fears of catching the highly contagious disease. Countless dance-goers still participated in mosh pits and danced in sweaty costumes in close proximity with other potentially infected people.

As Liam Gong ’17 stated, “Having fun with my friends, celebrating Halloween and going to one of the four Sadie’s Dances I will have in my life is something that I will risk getting sick for.” On October 22, on the Daily Bulletin, Dr. Hagamen posted, “Managing Ebola Risk at Deerfield”.

In this report he added new perspective, while assuring the community that the risk of infection is extremely low. He again advised all students, staff, and faculty to receive a flu shot and take special care of personal hygiene. Also, he asked that all visitors who have traveled to Liberia, Sierra Leone or Guinea within the past 21 days contact the Health Center immediately.

Dr. Hagamen concluded, “I will continue to carefully monitor these issues and will let you know should anything change. Despite the current anxiety over Ebola, it is my hope and expectation that we will experience a healthy and successful school year. Please feel free to call or email with any concerns.”