You need to enable JavaScript to run this app.
News
School Cracks Down
Olivia Davis '15 Senior Writer
October 15, 2014
No Comment

Upon returning to Deerfield this fall, students have observed a new strictness permeating the campus. It is evident to many students and faculty that the administration has become more stringent in adhering to the Academy’s code of conduct, especially at required school events. During the 2013-14 year, School Meeting had a more relaxed atmosphere: students could eat snacks from the Greer, sit on the West Gym floor and discreetly glance at their cellphones undetected by faculty. 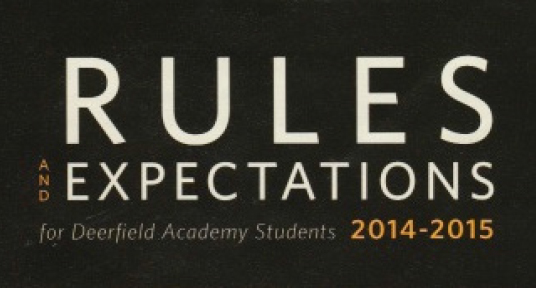 This year, however, none of this is possible. As Alan Lam ’15 observed, “I have noticed, more so than in the past, faculty reminding students not to use cell phones during School Meeting.”

This transformation has not been restricted to the weekly all-school gathering. Many other school rules have been strongly reinforced, and new, stricter rules have been put in place. Mobile phones are now officially prohibited in the Dining Hall, teachers have been more vocal about dress code violations, and attendance at required events has been stressed.

Kate Palmer ’16 said that she has “observed many students being spoken to regarding outfits that do not comply with the requirements of dress code.”

This change has ignited discussion regarding whether there is a correlation between the No-AP trial last spring and the current implementation of rules. During last year’s four-week trial, Accountability Points were not given to students for missed commitments and/or classes. The community saw a sharp decline in attendance at School Meeting, sit-down meals and academic classes. Many people have questioned whether the newly implemented strict rules are an attempt to “undo” the relaxed nature the No-AP trial brought to the school.

Both Dean of Students Amie Creagh and Assistant Dean of Students Kevin Kelly have confirmed that there is no connection between the result of the No-AP trial and the new rules. They both say that there has not been an increase in strictness, but a return to the values that define Deerfield. This, in turn, correlates to the faculty being more aware of the various rules on campus and their enforcement of them.

Ms. Creagh said that this new attitude began at the faculty meeting last spring when Head of School Margarita Curtis and Associate Head of School John Taylor posed the question “What are some daily practices that we are good at that are connected to core school values, and what are some areas where we can commit ourselves to being better?”

The general consensus, Ms. Creagh affirmed, was that, as a school, Deerfield has a set of core values and traditions, including, but not limited to, School Meeting attendance, the cell phone policy and dress code, which were not being enforced.

According to Ms. Creagh, Deerfield is now in the process of returning to the distinct practices that define the school, and Ms. Creagh believes this shift that the students have seen is a “roll out of an all-hands-on-deck agreement that this is something we say we do and we should actually do.”