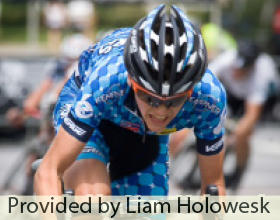 In addition, Holowesko is the number-one cyclist among 13 and 14-year-olds in the United States and is seeded in the top forty for 18-and-under. He won the U.S. National Championships time trial for his age group.

Every Wednesday, Holowesko goes on a two-hour ride, covering about 45 miles. “The hills here are such good training. It’s completely flat in the Bahamas,” he remarked.

Deerfield’s climate, which differs from the one Holowesko is accustomed to, allows him to try new training methods. “This winter I will do another form of cycling called cyclo-cross,” he said, “[in] which [the bike] can go through snow and cross-country trails.”

Holowesko is excited to join the cycling team in the spring. One day he hopes to race in the Tour de France. 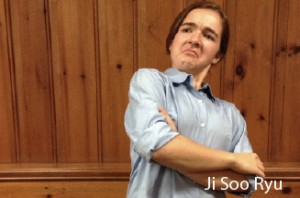 Improv Club participants recognized freshman Abby Lupi’s talent as soon as she stepped onstage. Lupi, from New Jersey, has acted in a number of student-run projects, independent films and Off-Broadway productions in New York. One recent movie, “I Am Alive,” won Best Short Film at the Boston International Film Festival.

Lupi plans to participate in Deerfield’s winter show, as Mrs. Hynds “got me excited about the program on Revisit Day.” Lupi looks forward to “taking on another character completely different from [myself] and expressing every emotion.”

Both Jim Carrey and Tom Hanks inspire her work. Lupi also admires Walt Whitman, Shakespeare and Edgar Allen Poe, for she is also an accomplished poet. She won a silver medal in the Scholastic Art and Writing Competition and aspires to earn gold at the contest.

Lupi also runs cross-country, figure-skates and does taekwondo. She reserves time for academic endeavors, however, and has already grown fond of Deerfield. She “loves trying new things and being diverse in [my] interests.”