You need to enable JavaScript to run this app.
News
Controversy Over the Hess Center
Brooke Horowitch '16 Associate Editor
October 15, 2014
No Comment

On September 19, after a yearlong construction effort, Deerfield students, faculty and benefactors gathered in the Hess Auditorium for the Hess Center dedication. 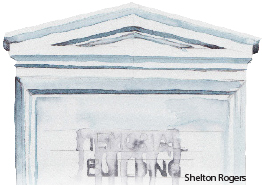 Upon seeing the Von Auersperg Art Gallery, Elizabeth Wachsman Concert Hall and the conspicuous Hess plaque in the building’s lobby many expressed concern: by changing the commemorative Memorial Building title, does Deerfield neglect alumni who sacrificed their lives during World War II? In addition, by identifying the Koch and Hess Centers as such, Deerfield strays from a long-standing tradition of refusing to name communal spaces. The Main School Building, along with the Dining Hall and athletic complex all have titles that reflect the buildings’ purposes, not their funders.

Liam Gong ’16 expressed this unease: “If we really wanted to express gratitude to Mr. Hess, Deerfield should’ve only renamed the auditorium. When the school renames buildings regularly, after [periodic] renovations, each title has much less value. They are no longer permanent dedications, but leases, billboards. [This case] is especially bad, because we’ve changed a name honoring World War II soldiers.”

Former Chair of Deerfield’s Board of Trustees, Philip Greer ‘53, responded to this concern: “We changed the name to honor the Hess family for their generosity. The family wanted to thank Deerfield for all it has done for [them]. They chose to support the arts, and their gift made the center a reality. Today’s building is greatly expanded from the original Memorial Building, a different building decades later. We have continued to honor the alumni who died in World War II with the memorial flagpole and a plaque at one entrance to the center.”

“The primary purpose of the Hess family in funding the renovation of the arts center was to thank and honor the school, and the spirit, values, and traditions for which it stands,” Head of School Margarita Curtis added. “When [the Hess Family] returned to campus for the dedication, they were surprised to see the two signs above both entrances to the auditorium, and asked that they be removed. They also feel strongly about relocating the plaque honoring our WWII alumni who gave their lives for their country, back to its original, more prominent place in the building.”

Mr. Greer reaffirmed that the school will carry out the Hess family’s wishes, “Both [signs] will be removed. Also, the original plaque will be moved to a more prominent location.”

Former Theater Director John Reese expressed his opinion: “I actually had a negative reaction to the name change when I first heard about it. However, upon reflection I’m sure the decision was given thoughtful consideration by the administration and Mr. Hess. I’m comfortable with the change as long as the individual spaces, old and new, are acknowledged by some visible symbol that signifies the donor. I think it would be good form if the school would perhaps create a marble plaque with the names of the sixty-one fallen former students who gave the ultimate sacrifice.”

Maaja Roos, Director of Music, appreciates the Hess family’s generous contribution. “It’s a thrill to be in an environment that replicates a conservatory of the arts,” she commented, “and when you treat young musicians like artists, minor miracles occur.”

Austin Parenteau ’15, an avid actor who participates in numerous Deerfield productions, added, “The center has me feeling like a kid on Christmas morning.”

By and large, Deerfield has embraced the Hess Center’s magnificence and potential. Though some continue to question its name change, Parenteau acknowledged, “With or without a commemorative construct, everyone will remember Deerfield alumni who served during WWII. I would have liked the name to remain as a [tribute], but memory lives in people, not plaster.”