In the fall of 1974, Norman Therien—now better known as Norm—walked into the Athletic Department office for the first time. At 19, he was the youngest person to ever hold the job; since then, he has played an active and irreplaceable role at Deerfield Academy. 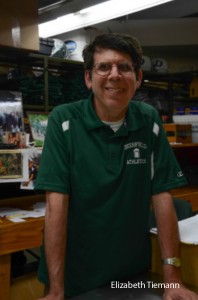 These days, from the minute Norm walks into the office until the last green-and-gray is turned in, his job is packed with challenges. His tasks range from relentless loads of laundry to organizing visiting locker rooms, to eagerly waiting for the return and results of away games.

“I wish everyone could love their job as much as I love mine,” Norm said proudly. Reminiscing about his 40 years at Deerfield, Norm said, “I have to say, no matter how challenging my days are, I never feel burdened or like I hate my job. Even when I feel sick, just coming here, doing my job, and seeing the students every day—it in an odd way heals me.”

When asked about his most special memories at DA, Norm cited the students definitively. “It’s not just the famous alums,” he said, “some of which I am very good friends with—like King Abdullah II of Jordan, who I saw recently at his class reunion—but any student who is having a rough day or did poorly in class. I have to be there to listen, I have to be open and assume that parental role.”

Norm added, “I love all the students, and I especially love it when alums come visit me.”

Over his time here, Norm has seen and lived through multiple Deerfield generations. And he believes that, besides the physical renovations and new facilities, the most significant change for the athletic department has been the ability for athletes to receive an exemption for their specific sport. Norm recounted a time when all post-graduates would be tri-varsity athletes and there was even a fourths football team.

“I understand [that] times have changed,” commented Norm, “and athletes do not want to get injured—but I really believe Deerfield athletics would prosper even more without athletic exemptions.”

Few other faculty and staff members can hope to rival Norm’s influence and relationships with students. Courtney Morgan ’16 stated, “Norm is more than just an employee, he is the godfather to all male athletes.” Similarly, varsity boys water polo co-captain Hugo Marsans ‘15 described Norm as “everyone’s biggest fan,” and “a friend who cares about you and every student regardless of anything else.”

William Morgan ’17 said simply, “Norm always has a cheerful face and inspires true Deerfield Spirit within all of us.”

Marsans proclaims to all students who haven’t yet had the pleasure of meeting Norm, “At first it might feel odd to have someone so interested in your personal life, but once you get to know him you will miss every day you don’t see him.”

As of now, Norm has no plans to celebrate his fortieth year, but he has been asked by the class of 1980 to attend a dinner in the squash courts. The celebration is primarily focused on the undefeated varsity football season of 1979—but “no sports celebration is complete without one of my special talks,” Norm laughed. “I feel so honored to be invited after all these years,” he said, his happiness apparent.

“It’s gone by so fast—40 years feel like a blink of an eye… but I feel like we have done a pretty fantastic job,” concluded Norm.