You need to enable JavaScript to run this app.
Opinion
The Perils of Satire: A Cautionary Tale
Zakiya Newman '17 Contributing Writer
September 10, 2014
No Comment

In June, the Internet exploded after news spread that Maya Peterson, a senior at Lawrenceville, who was forced to resign as student president after she posted controversial photos on Instagram of herself. 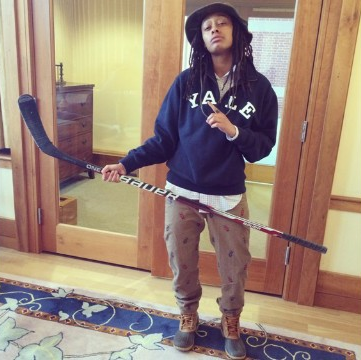 She was wearing what she described as the “typical Lawrenceville boi” outfit, complete with a Yale sweatshirt, L.L. Bean boots and a hockey stick. The post was accompanied by the hashtags #romney2016, #peakedinhighschool and #confederate.

The incident split Lawrenceville in half, with one side saying Peterson disrespected a large portionofthestudentbodywithherracistactions. The other half believed the photos were purely satirical and that the class president didn’t deserve to receive harsh disciplinary treatment.

While the way in which Ms. Peterson chose to present her beliefs was inappropriate, I believe the political statement she expresses through her satire is a good reflection of the frustrations that many minorities experience with prep school culture.

As black females represent less than 8% of Deerfield’s students, I find it uncomfortable that certain practices unconsciously promote traditionally racist values. The Confederate flags that are visible inside the Johnson Doubleday dorm on the walk to DBSA meetings (ironic?) are treasured patriotic symbols for some students in the student body, but represent racial oppression for some black students.

Last year, an Instagram incident similar to Ms. Peterson’s occurred at Deerfield. A black female student posted a drawing online depicting white people as traditional African American slaves, while Martin Luther King Jr. smiled among clouds satisfied with this reality. The controversial drawing caused students to complain to the administration about the insulting, reverse-racist nature of the photo; and action was taken to discipline the student that posted it. Though this incident did not quite explode as the one involving Ms. Peterson did, considering America’s historically racist culture and the growing power of social media, there is a possibility that something along the scale of Ms. Peterson’s controversy could develop at Deerfield.

I don’t believe Ms. Peterson’s actions were racist. They were constructed merely to parody Laurentians who create a prep school lifestyle that is uncomfortable for black students. According to the Oxford English Dictionary, racism is “the belief that all members of each race possess characteristics specific to that race, especially so as to distinguish it as inferior or superior to another race.” Ms. Peterson’s goal was not to prove that wealthy white males are inferior to her people, but to mock the traditions of the “majority” at Lawrenceville.

Peterson’s photos don’t prove reverse racism’s existence because this concept is impossible. Black females have never—not now or at any point in the last 500 years in North America— been in a position to distinguish anyone as inferior to themselves.

Social media is undisputedly what makes this a 21st-century, Generation-Z predicament. The platform on which Ms. Peterson chose to express herself, Instagram, allowed her to act on her beliefs impulsively without considering the consequences, then perhaps unintentionally reach a global audience. I support Ms. Peterson’s opinion and admire the courage it took her to express it, but because of the way she chose to express it, she has lost an opportunity to promote healthy dialogue. Because the specific language of her post was so provocative, the controversy surrounding her punishment has gotten more press than the deeper meanings behind her satire.

It can’t be denied, however, that Ms. Peterson has opened discussion on the taboo subject of race in prep school culture. As globalization thrives, we must adapt to this new world by incorporating racially sensitive elements into the traditional prep school lifestyle that make the entire student body comfortable. Ms. Peterson has reminded us of this.