You need to enable JavaScript to run this app.
A&E
DA Looks After Norman in Scotland
Maggie Yin '16
September 10, 2014
1 Comment

For two weeks this summer— led by Scotland native Catriona Hynds, along with Peter Hynds and Sandy and Paul Yager—17 Deerfield students attended and performed at the Edinburgh Fringe Festival. Over five million people from all over the world travel to Scotland each year to attend the world’s largest celebration of the arts. This year Deerfield Academy was again part of it. 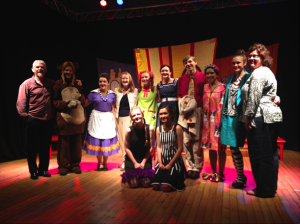 “I think it’s the best production of Norman I’ve seen,” said the Scottish playwright himself, Stewart Brown, after seeing the Deerfield production of his play Looking After Norman. “And I’ve seen professional ones,” he added.

Brown, whom Hynds met at the start of her career, has remained friends with her ever since. He even flew his family in from different places—the family that inspired his play—for the festival performance. This was the same play that the cast performed last year in the White Church.

Brown applauded the great energy and heightened exaggerations of the actors. “[The play] was intended to be a cartoon, but you took it even farther than that,” he said. “The big gestures added movement to the whole thing, which I thought gave it life, especially for the children.” He also noted what set the Academy Players apart from the other productions he seen: “The sound effects and the music lifted the whole thing. These two things gave your production its own style, its own identity.”

Performing four times at a small venue in Morningside, the cast and crew vigorously promoted their show throughout the festival in order to have as large an audience as possible. They headed to the Royal Mile in full costume and makeup, handing out green fliers and pink stickers to the sea of people walking by, joined by the hundreds of other productions doing the same.

Querube Suárez-Werlein ’14 recalled: “The moment itself was kind of breathtaking. Performing at the Fringe is something we’ve anticipated for so long, and we’ve rehearsed all through the winter with this larger goal in mind. Just finally reaching the Fringe seemed really unreal.”

Dorie Magowan ’15 added, “It felt so gratifying to finally be in the place we had worked so hard to be.”

Besides a successful performance, the troupe also scored in audience size: 10 times the Festival average for a high school production. “Mrs. Hynds planned to do a children’s show to get a larger audience and everything paid off really well,” Austin Parenteau ’15 explained. “It was fantastic.”

The group also explored Scotland, experiencing firsthand the country’s culture and beauty. Some highlights included a trip to the Highlands and Scottish countryside, watching the Edinburgh military tattoo, attending a traditional Scottish dance or “Céilidh,” and of course, witnessing the range of art and theater, the thousands of shows at the Festival.

Suárez-Werlein described the festival spirit: “There is such a buzz of artistic activity, it’s inspiring. There are so many people running around and having fun and doing crazy things, but also doing things that are out of the box to try to make a point, to try to change people’s’ minds.”

Overall the company came away with a once-in-a-lifetime experience, from how to correctly pronounce Edinburgh (ed-n- bruh), to how to work together as a team. The group collectively managed to see almost 300 events of theater and art.

Concluded Magowan, “A highlight for me [was] being in this totally new country and getting the chance to be with this amazing group of Deerfield students who [were] all so inspired and excited to be here.”

Ed-n-bruh, I wish I was there!