You need to enable JavaScript to run this app.
A&E
Artist of the Issue
Lucy Baldwin '15 Senior Writer
September 10, 2014
No Comment

Ever since her first year at Deerfield, Genevieve Gresser ’14 has found ways to pursue her love for photography. She has photographed for the yearbook, taken Intro to Photography class with Visual Arts teacher Tim Trelease, and has been published in both The Scroll and Albany Road. This fall she plans to take AP Photography and is excited about the opportunities she will have to experiment in
the new arts center. 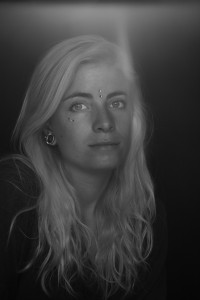 “I was always interested in photography,” Gresser recalled. Her love of photography was encouraged at a very early age by her mother. “My mom has been teaching me all about cameras and photography for as long as I can remember,” she said.

Gresser was still learning to walk when she took her first photos with her mom’s Canon. Unlike most kids that age, she chose to capture images of her cousins and siblings rather than making futile attempts at a selfie or blurry images of the floor.

Today Gresser continues to be inspired by similar subjects. “I tend to [be] drawn toward people and portraiture,” she said. “I like meeting new people and trying to capture their personalities.”

This past summer, while taking a two-week photography workshop in Maine—as she does every summer—Gresser developed a portfolio concentrating on portraiture. This portraiture series may become the concentration section of her AP portfolio.

Gresser’s tendency toward portraiture has led her to admire the work of Diane Arbus and Arno Rafael Minkkinen. “I relate to Minkkinen’s belief that ‘art is risk made visible’ and use that to help guide my work and take chances with new techniques,”
she explained.

Whether it’s experimenting with different studio lighting, or using the dark room to try new development methods, Gresser is willing to take chances. She voiced her desire to photograph the protests that are currently taking place in Fergusson, Missouri. “I’ve made photos at protests before, and I’d love to do it again,” she said.

Following Deerfield, Gresser wants to pursue photography in college and is particularly eager to try film. As a photographer, Gresser both values the medium’s accessibility and appreciates the complexities involved in producing exceptional photography.

“The great thing about photography is that anyone can make a good photograph,” she said. “The difficult part comes in making more than [the] occasional one.”