You need to enable JavaScript to run this app.
Features
Who Searches for Sunken Ships Under the Sea?
Alexa Murray '15 Staff Writer
May 21, 2014
No Comment

Dr. Robert Ballard, the noted oceanographer, came to Deerfield on April 30 to talk about his work, his findings and his love of the ocean. Known chiefly for locating the Titanic, Dr. Ballard has also discovered numerous other ships, artifacts and biological phenomena. 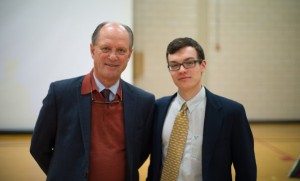 “Where I grew up there was an outback,” Dr. Ballard said. “Back in those days there was that wonderful ‘just be home before it’s dark.’ Whether it was a bicycle, my car or just walking, I wanted to do a walkabout. I loved to turn over rocks, and just the sense of exploration . . . grew and grew and grew, and I’m still turning over rocks.”

Dr. Ballard completed two majors and two minors at the University of California, Santa Barbara (chemistry and geology, and physics and mathematics, respectively). “I didn’t make the dean’s list,” he said, “but I survived.” He continued with PhDs in marine geology and geophysics from the University of Rhode Island before taking to the water.

His favorite discovery, the hydrothermal vents found at the junctions of tectonic plates on the ocean floor in 1977, has actually—along with Carl Woese(’46)’s discovery of Archaea—provided scientists with a potential theory on the beginnings of life. “It was such a huge homerun,” explained Dr. Ballard. “I mean, it was the origin of life on the planet.”

Now running an exploration operation with bases around the world, Dr. Ballard allows a group of students to become part of his ship’s team every summer. Nate Lane ’14 was one of these students last year. While working from 8 a.m. to 4 p.m. every day in shifts, they analyzed data to plan missions and revisit old discoveries.

“It was intimidating sometimes,” Lane said, “being a nobody high-school kid working with all these super-experienced engineers and scientists . . . Some of the stuff we handled was confidential.” During their downtime, students attended lectures by URI professors and worked on a final project using data collected while at sea.

One of Lane’s most memorable moments came when a scientist from the United States Geological Survey (USGS) was watching the video feed from the ROV, and some blue rocks appeared on the screen. Dr. Ballard, in passing, pointed at the screen and asked if the team had found the hydrothermal vent, as the blue rocks were solid methane hydrate. The scientist stated that her 20 years of experience told her that hydrothermal vents could not grow under those conditions, but a moment later, the vents came into view. Upon Dr. Ballard’s return, the scientist was embarrassed for being mistaken, but rather than gloat, Ballard exclaimed how excited he was at the discovery.

“[Dr. Ballard] doesn’t care about the money, or the fame, or the power; he is truly driven by the need to explore and to discover,” Lane said.

Dr. Ballard reiterated this point himself: “I just love, love the process of discovery. I’m not looking back, I’m looking at that horizon, and the nice thing about a globe is that you never get there, you just keep walking.”