You need to enable JavaScript to run this app.
A&E
Artist Of The Issue: Thomas Yum
Bella Hutchins '16 Editorial Associate
May 21, 2014
No Comment

Three-year senior Thomas Yum is enrolling in the demanding Program in Liberal Medical Education (PLME) at Brown University this August, but he will continue to pursue his hobby of playing music. 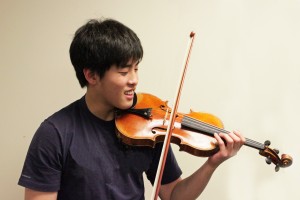 Yum began playing both violin and piano in third grade, after witnessing a close friend miss a day of school for a violin concert. “I figured if I also played piano [in addition to violin], I would get out of school twice as often,” he said, soon thereafter admitting that he’s only been able to miss a few days of school since he began playing.

Yum describes the beginning of his musical journey at Deerfield as “not quite stellar.” When he first arrived as a sophomore he had difficulty balancing his work load with practicing both instruments and ended up dropping piano.

However, after learning to organize his time for both music and school, Yum excelled in Deerfield’s music program, exhibiting his talents in numerous solos with the DA Orchestra. Throughout his career here, Yum has built relationships and collaborated with numerous faculty here, “especially Mr. Warsaw.”

Like many students on campus, Yum is always listening to music when he has spare time. Yum feels there is “something transcendent” about good music; it can lift him out of this world while he’s listening. Yum praises music for its reliability, stating that it is “just always there.” He enjoys listening to a wide variety of genres, including classical, modern funk and shoegaze. His favorite albums are Hospice by The Antlers and Songs About Leaving by Carissa’s Weird.

As he extends his musical career to college and beyond, Yum will continue to look up to his musical role model, Schubert, whom he describes as the only person who has attained his “lifetime aspiration: being buried next to Beethoven’s grave.”

Yum has left a considerable mark on the musical programs at Deerfield, especially the orchestra. And this May, he was able to create a school wide musical memory in the dining hall by serenading a junior girl as an invitation to the Senior Prom.