You need to enable JavaScript to run this app.
Features
Humans of Deerfield
Dorie Magowan '15 Staff Writer
April 21, 2014
No Comment

In 2010, photographer Brandon Stanton began taking photographs of citizens of New York City, learning their stories and including quotes about his subjects alongside the portraits he posted on his blog, Humans of New York. Four years later, his Facebook page has over four million likes, with each photo he shares providing a glimpse into the lives of the people of New York City. 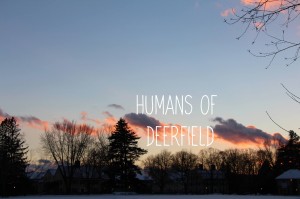 Recently, Maddie Moon ’16 decided to bring the popular concept to Deerfield. Along with a group of friends, Moon takes pictures of students and has them share something about themselves, and then posts the story on the group’s Facebook page, Humans of Deerfield.

The intent of the page is to provide insight into the diverse lives of the Deerfield community, and to share them with as many people as possible. Moon hopes to bring the community together through sharing these stories.

“Four years is definitely not enough time to get to know all of the students at Deerfield,” Moon said. “That’s the main reason why I decided to start the page. My goal is to get as many stories as I can up on the page and to make sure that they aren’t all people from the same friend group.”

Around the same time as Humans of Deerfield was created, another page was posted entitled Deerfield Compliments, with the aim of providing a way for students to anonymously send in compliments about their peers to be posted on the page. However, Moon wants to stress that the two pages are not connected. There has been a fair amount of controversy on campus surrounding some of the posts on the Deerfield Compliments page. On March 7th, Deerfield Compliments addressed the issues in a post, “It has come to my attention that some of you are taking advantage of this page to make fun of, joke around, or give backhanded compliments to each other. This page was not made for that purpose. As we were wrapping up winter term, I realized that the atmosphere at Deerfield was not always so cheerful. Especially with winter term exams coming up and all, I thought we needed a little boost to the atmosphere and made this page.”

In a matter of a few weeks, Humans of Deerfield has received hundreds of likes, with the page views well into the thousands.

“When my friends and I first started this project, we didn’t expect it to become huge. We thought we would just contribute our love for photography to Deerfield by starting a page. We’re so excited that it’s gotten so huge, up to the point where we get thousands of views. We really hope to continue this project in the years to come,” Moon said.