You need to enable JavaScript to run this app.
Opinion
Hailey Nuthals: Behind the Counter at the Greer
Hailey Nuthals '14 Contributing Writer
April 26, 2014
No Comments

In one night, I make as many as 20 Oreo frappes. Between 9 a.m. and noon on Saturdays, I can make more than 40 bacon- egg bagels. I prepared all three of the soy iced coffees you drank just now with the coffee I brewed at the beginning of my shift. I am a Greer worker. 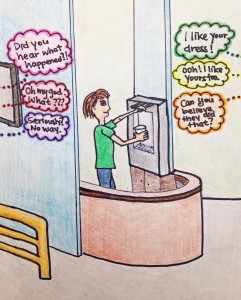 I am, however, also a student: one of the many who spend time in the Greer throughout the day. I go to classes in the morning, and whatever co-
curricular I’m doing that term in the afternoon. The only difference is that a couple times a week, at a pre-appointed time, I show up at the Greer, not to get a chai, but to make it. Being both a student and an employee of Deerfield affords me a different perspective on the whole system—a perspective that is not often found elsewhere on campus.

Behind the gray speckled counter lies a whole other world: the real world. Though there are students who have argued that the Deerfield bubble is a myth we tell the freshmen, I find it to be more real than some would think. On one side of the Greer counter, I hear the campus gossip. Hoedown dates, DC specifics, and who was waitlisted at their parents’ alma mater (a scandal the underclassmen will soon understand). Standing on the other side is an employee is working through college to support her son, who is just barely in preschool. A blender sits in the sink, still dripping from the chef’s personal protein shake (our blenders are exponentially more powerful than the one he has at home).

Having worked as a lifeguard and swim instructor for years before coming to Deerfield, I was used to having a job. At the Greer, I figured the working experience would be the same, except you’d substitute water with food.

And it is similar. Mostly. Students come and order— sometimes making eye contact and chatting with the “white shirts” (non-student employees), sometimes silently grabbing their Gatorade and going on their way. To them, we just make the food, then call their names for it to be collected. Often someone asks for another ketchup bottle (despite the lone one sitting on the table just out of sight) or a to-go box (always surprised that they have to pay for it, no matter how many times they ask). The regular stuff, really. Students are either polite or not, as in any restaurant. Meanwhile the white shirts learn their names, their orders and their personalities. What’s different is the talk. Chat at my pool was the same on both sides—local interests, difficulty at school, gas prices. Deerfield students, however, have a whole other reality in their conversations. They are not rude: being rude goes against the tacit code of etiquette on campus. There is an implicit understanding: you always say hi to traffic on the pathways, smile at your teachers, say “thank you” after each action completed by another person.

What Deerfield students are is oblivious. When some come up asking for the third time in five minutes if their food is done, it’s frustrating. No, your food is not done, probably because you ordered during a rush with the rest of your sports team in the ten minutes before the bus leaves, and we’re trying to cook twenty meals on one grill. We have no issue with students getting food in to-go boxes, so long as they say they would like it to go when they order. We love having you hang out with your friends for a few hours each night, as long as you clean up after yourselves and respect the space. Most times when people ask me, I say I love working at the Greer. I get to make friends with another group of adults and earn some money besides. The parts I don’t love are seeing why Deerfield students have a reputation for being spoiled and short-sighted. Of course, not all students here are, but such is the case with all reputations. It only takes a few temperamental students to ruin a shift, and only a few more to make a fun job turn into a contractual obligation.