You need to enable JavaScript to run this app.
Features
Be Worthy of Your Heritage
Dorie Magowan '15 Staff Writer
April 21, 2014
No Comment

The Deerfield motto, “Be Worthy of Your Heritage,” reflects the value our school places on honoring the traditions of the past, while still upholding a certain set of principles for our community as we move toward the future. Although we have many traditions and aspects of life here that tie us to our history, one of the strongest links we have on campus is the large number of alumni faculty members. These teachers and community members are able to help us remember the ways Deerfield has been, as well as help guide us as we go forward.

“I think there’s more school pride now,” philosophy and religion teacher Neil Jacobs ‘69 said. “I think the academic standards of the school and the quality of the student body is much higher than when I attended Deerfield, which is shown in some of the traditions that were not here when I attended, such as singing to students on their birthday in the dining hall. It seems to me there is much more expression of feeling generally, and school pride is one of those things.”

Having attended Deerfield at a time when there was not a system of accountability points, Mr. Jacobs—who is also senior counsel at the Boston law film Wilmer Hale—explained his views on the school’s development: “I believe there was more clarity in what the school stood for. I think at that point we understood that what was expected of us was hard work, integrity and carrying out responsibilities as a community member. I think today the students still are expected to do hard work and have integrity and honesty, but I think there is far more leeway given about meeting requirements of the community. The accountability point system creates an overlay that is inconsistent with the school values. I think because we have moved in many directions that are to the school’s advantage, we’ve lost our relentless focus on character that was in place while I was here. I believe the school today focuses on and values character, but it is not as relentless as when I was here.”

Despite his disagreement with APs, Mr. Jacobs believes that the school has vastly improved since his days as a student. “Deerfield’s values express many of the traditions we had,” he said, “but the school has now modernized them.This has made the school fit the culture of adolescents as they exist today. I also think DA has introduced new and better teaching methods; the teaching is far more sophisticated. This is a much better school.”

David Thiel ’91 attended Deerfield for two years as an all-boys school, and for the first two years of the school being co-educational. “We thought girls would ruin the school,” he said. “But it turned out to be no big deal. That’s when the dorms got locks. The academics are dramatically better. It’s a lot more rigorous than when I was here, and I think the girls are a large part of that.”

When girls began attending Deerfield, the number of many of the sports teams were cut down.

“My freshman year, I had never really played any sports,” said Mr. Thiel. “I decided to play soccer, and there were 11 teams for the sport. The whole athletic program was really about participation, and now it’s about performance.”

According to Drew Philie ’09, assistant athletic director, this change is also reflective of the push toward specialization in many New England boarding schools. Mr. Philie also noted the new perspective of Deerfield he has gained since becoming a faculty member. 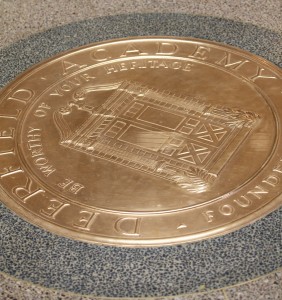 “One thing that remains constant is how great the teachers and people who have been here for many years now are,” he said. “They are just dedicated to making this place better for us as students. I didn’t realize how much work went on behind the scenes trying to making kids’ lives around here more fun and energetic. They work hard at keeping the spirit alive. We have teachers who are willing to make this place a better environment.”

Mr. Philie also counts weekly school meeting and advisor lunches as important components in the community and the effort the school makes in having a connected faculty and student body. “You still feel the vibe that surrounds this place,” Mr. Philie said. “People still know who you are and say hello to you by name. It’s a place where kids are dedicated to everything they’re doing, and really enjoy being here.”

“A lot is the same, and that’s a beautiful thing,” Mr. Thiel said. “Coming back to Deerfield, you feel like you’re coming home, from beef Wellington and turkey dinner in the dining hall, to the rhythm of going from class to class. It definitely feels like the same place—even the rules that are broken are the same rules broken.”