You need to enable JavaScript to run this app.
Sports
The Thirds Team’s The Charm
Maddie Moon '16 Staff Writer
March 7, 2014
No Comments

This year, the Deerfield hockey program has created a thirds team in order to accommodate an unusually large number of students who wanted to play.

The influx was due in part to the competition for this year’s squash teams. Over 65 students tried out for squash in December; and with the limited number of spots available, many were told to find another co-curricular. Rather than keep them on the JV practice squad, as has been done in past years, Assistant Athletic Director Drew Phillie ’09 and Assistant Dean of Students Toby Emerson volunteered to coach this new team of 16 players. 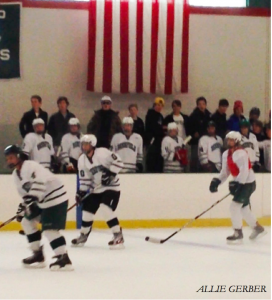 “There were lots of students that tried out for squash and got cut,” explained Emerson. “Rather than making a fourths team for squash, Mr. Phillie and I decided to start a thirds hockey team. This is the first time in my 13 years at Deerfield that we’ve ever had a thirds hockey team. There were always rumors about starting one, but we always kept a few extra boys on our varsity and junior varsity teams instead.”

Mr. Emerson is also the coach for boys JV, and he has the thirds players practice with JV once a week.

“It’s sometimes very hard to keep up with the boys JV team,” said Tim Gerber ’17. “However, it also motivated me a lot throughout the season.”

“The team has some very awkward practice times,” Mr. Emerson remarked. We usually don’t have practices on Tuesdays. On Wednesdays, we practice right after lunch, and on Thursdays during faculty break. We have the athletes participate in FNHL on Fridays nights instead of practice.”

The limited ice time was just one of the challenges of starting the team. In addition to the scheduling constraints, most of the kids on the team were first- time skaters.

“The hardest part about joining the team was that a large portion of us have never skated before,” said Mason Bonnie ’17. “It took a long time trying to figure out the rules and how to play.”

A lot of players had no equipment of their own.

“It was challenging to find the hockey equipment. I wasn’t sure where to find the things I needed so it took some time,” said Ben Reichert ’16.

“Mr. Davis has really helped us a lot organizing ice time,” said Mr. Emerson. “As for the equipment, we managed to find some old equipment that the kids salvaged from Norm.”

Nevertheless, thirds players have given positive reviews on the team and emphasize how much fun it has been to try the sport.

“I have a lot of fun playing hockey even though it’s the first time I’ve played,” said Gerber. “The team built some good chemistry and it’s a great group of kids.”

“The best part about being on the team is how much fun we all have,” added Bonnie. “Our practices are something that I always look forward to.”

“My favorite part about the team was when we made the two ‘top cheddar’ goals against Greenfield High School,” said John Jackson ’14.

“The boys are fearless,” Mr. Emerson said. “They love to go out on the ice and smash into each other. They know they’re not very good, so they go out and try to have fun as much as they can.”

The boys have also had a lot of fun scrimmaging against the girls JV team. They have played three times so far and are hoping to play again before the season ends.

“Both teams really wanted to win, so it got very intense,” added Bonnie.

“I really enjoyed the scrimmages against the girls,” said John Wagner ’14. “It was great competition and it really motivated us a lot to work harder. I look forward to playing them again.”

Considering many of the players only joined the team as a backup option, thirds players have participated with remarkable enthusiasm. Mr. Emerson was impressed with their zeal, noting, “The boys are very eager to learn the game. On Fridays and Saturdays, the boys try to get on ice, even if it’s only for 30 minutes, in between other hockey games.”