You need to enable JavaScript to run this app.
News
CVS Turns its Back on Tobacco
Henry Cobbs '15 Editorial Associate
March 9, 2014
No Comment

On February 5, 2014, CVS Caremark announced that CVS will stop selling tobacco products before October 1, 2014. The chain, which has more than 7,600 stores across the U.S., will become the first national pharmacy not to sell tobacco. According to CVS, the company’s projected loss will be approximately $2 billion in annual sales. 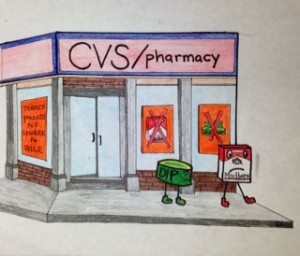 In an interview with The Scroll, Troyen A. Brennan, M.D., the Chief Medical Officer at CVS, explained that the move is not necessarily altruistic. But rather, as the company furthers its mission to be recognized as a healthcare provider, the sale of tobacco products simply did not align.

“Cigarettes are unalterably bad for people,” Dr. Brennan said. “There’s no way you can use them in moderation. A lot of the other things that we sell, including soda, chips and other things like that, when eaten in moderation, are not harmful, but there’s no such thing as moderation associated with tobacco.”

“I am not aware of any pressure applied to CVS to stop selling tobacco products,” said Lieutenant Commander Matthew Sullivan ‘91, an official at the Food and Drug Administration who works with the regulation of new drugs. “The Secretary of Health and Human Services, Kathleen Sebelius, however, did issue a press release praising the CVS decision, and openly requesting other retail outlets to follow suit.”

Barri Blauvelt P’15, a leading cancer researcher and CEO of Innovara Inc, a healthcare development company, explained the various risks associated with tobacco use: “The U.S. President’s Cancer Panel had previously identified tobacco and obesity as the leading causes of cancer in the U.S.A. It is a major cause of chronic obstructive pulmonary disease and is also a major contributor to cardiovascular diseases, including high blood pressure, leading to stroke or heart attack and death.”

“When I was at Deerfield 25 years ago, tobacco use among my peers was still fairly common,” recalled Dr. Sullivan. “Although I’m obviously not a high school student now, I think that the winds have shifted, and cigarette smoking at least is far less popular. Smokeless tobacco, however, doesn’t seem to be declining in popularity quite as fast as smoked tobacco, although it is used by a far smaller number of teens.”

On campus, chewing tobacco remains a popular practice. Statistics from the Deerfield Health Center reveal that just six percent of ninth graders at Deerfield use smokeless tobacco. But by senior year, an astonishing 33% of boys admitted to using dip regularly. Around one third of those respondents use upwards of three times per day.

Although tobacco has not proven to be more harmful to teen users, “where there is a huge difference is on the cumulative lifetime effect between these two individuals [an adult and a teenager],”explained Dr. Sullivan. “The teen smokers have decades in front of them in which to rack up the number of cigarettes smoked,” explained Dr. Sullivan