Imagine having your Spanish classroom be a café in Madrid, or being able to practice your Chinese while shopping at Xui Shui Jie in Beijing. Students at SYA (School Year Abroad) experience just that. 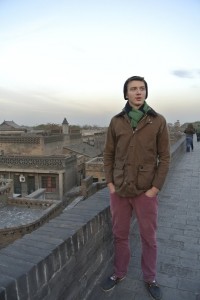 Founded in 1964, SYA has been bringing high school juniors and seniors to locations around the world to study languages, experience other cultures and develop global leadership skills.

Every year about 60 students from over 45 independent schools nationwide attend SYA programs in Spain, France, Italy and China. Currently eight DA students are attending SYA programs: Tarah Timothe ’15 and Celeste Diaz ’15 in Spain; Alexia Hernandez ’15 and Ben Schiller ’15 in Italy; John Bowllan ’15 and Jason Bravo ’15 in France; Michael Beit ’15 in China; and Aaron Bronfman ’15, who returned to Deerfield after a half-year program in China.

“I decided to go to SYA because, personally, I really craved something different,” said Timothe ’15. “It is a program starkly different than anything else given to high school and college students. We get to spend a year in a country completely immersed in everything.”

For Hernandez ’15, the opportunity to do SYA was just too good to pass up. “I remember kids saying that they didn’t think they would be able to leave Deerfield for a whole year, but it’s totally worth it,” she said.

While in a different country, SYA students earn American high school credits and continue to take classes that correspond with regular junior and senior requirements. What is unique about academics at SYA is that students also take courses that focus on the history, culture and literature of their respective host country. Because language is such an important aspect of the SYA experience, students take intensive language classes that are taught by native speakers.

“What sets [SYA courses] apart from Deerfield’s courses is that they are centered around China, i.e., Chinese history and books about China,” said Bronfman ’15. “Chinese class was different in that it was so intense. I took two classes in Chinese, and never once was there a word spoken in English.”

In Italy, Hernandez ’15 enjoys participating in the co-curricular activities that her school has to offer. “The first semester I played soccer with the SYA team,” she said, “but some people took cooking, photography, [or] boxing classes.”

The SYA program makes sure to allow students free time to spend with their host families, as well as time to independently explore their community and travel to nearby cities and sites.

Timothe ’15 has enjoyed the traveling aspect of SYA and is excited to see more of Spain during her stay. “For New Year’s, two friends and I went to Barcelona, and it was spectacular,” she said. “We bought our own bus tickets, booked a hostel and set up a whole itinerary for our own trip. Opportunities like that do not happen at [Deerfield].”

Beit ’15 has also taken advantage of his freedom to help his community in Beijing. “My favorite experience has probably been tutoring local migrant workers in English,” he said. “As my Chinese gets better, I can understand their stories, which are unlike anything I have heard before—you wouldn’t believe the lives some of these people have.”

The homestay component of SYA is an integral aspect of the program and is often the most memorable among SYA alums. At home, students are able to apply language skills learned in the classroom and further immerse themselves in the culture of their host country. Before students go abroad, families are interviewed and matched with the SYA students who are most compatible.

For Beit ’15, his host mother and father have become like family: “Homestay is just a regular part of my life now. I’m close with my host mother; we talk every night about school, life, college, etc. I am so grateful for them.”

“In the States, it is just my dad and I,” said Timothe ’15. “Here in Spain, I have three siblings, two girls who are 15 and 17, and an older brother who is 21. I have learned how to be a sibling, which has been interesting and really rewarding.”

SYA gives students the opportunity to live and breathe a different culture while learning a foreign language, developing independence and seeing the world from a different point of view—all necessary for a global citizen in today’s world.

“In retrospect, this is one of the best decisions I have ever made,” said Beit ’15. “I miss Deerfield and am looking forward to coming back, but I am just grateful to SYA and Deerfield for allowing me to have this experience.”

For Bronfman ’15, now back on campus from his semester in China, studying abroad had more impact on him than he had expected. “Besides my Chinese being infinitely better,” he explained, “I learned a lot about Chinese culture. But the most important thing I took away from China is what I learned about myself: how to function independently, and how to deal with situations I was uncomfortable with. So in the end, I truly believe I learned more [at SYA] than I could have in another semester at DA.”