You need to enable JavaScript to run this app.
News
Reflecting on Turbulence in Thailand
Margaret Chappell '15 Editorial Associate
February 4, 2014
No Comment

Thailand has experienced much political unrest in the last few years. In 2006, the Prime Minister Thaksin Shinawatra was overthrown by Thailand’s military on charges including corruption, human rights violations and plans to provoke violence. Mr. Thaksin was exiled and is now in self- imposed exile. 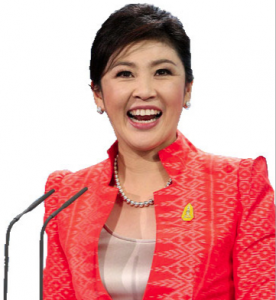 A new constitution was approved in 2007; however, political problems continued, and in 2010, a group called the Red Shirts protested the appointment of Abhisit Vejjajiva to Prime Minister. The protests became violent, resulting in just under 100 deaths and over 1,000 injuries.

Now protests have begun again against Thailand’s current Prime Minister, Yingluck Shinawatra. Because she is Mr. Thaksin’s younger sister, critics believe she is acting as her brother’s puppet. After she tried to pass an Amnesty Bill that would allow him to return to Thailand, people started to protest again. In response, Ms. Yingluck dissolved parliament and set elections for this coming February. However, protesters recently shut down Bangkok and are persisting with their demonstrations.

Neither Wyn Sutuntivorakoon ’14 nor Natalia Briones ’16 has strong feelings about Mr. Thaksin, but “he is a really controversial character,” Sutuntivorakoon said. “There is one group of people who absolutely love him and his party and his ideals, and there is another group who oppose them.” Sutuntivorakoon acknowledges the possibility that Ms. Yingluck is her brother’s puppet, and Briones believes that she is.

“The only thing I’m confused about is why she became the next Prime Minister,” Briones said. “Because if she is the sister of Thaksin, she would have to have some connections with him. I think the reason she became Prime Minister was because so many people outside of the city support her, and that’s way more than the people in the city.”

Both Briones and Sutuntivorakoon were affected by the Red Shirt protests in 2010.

“There were shootings maybe five minutes away from my house, and I couldn’t get out,” Briones explained. “I couldn’t go to school, because they shut down all the roads, and if you went outside you would see Red Shirts. It was kind of like a zombie movie. The streets were empty, and there were piles of dirt everywhere . . . They burned this electricity factory near my house, and we didn’t have any electricity; and they also burned this very big shopping mall in the center of Bangkok, which was scary.”

“There is this skytrain in Bangkok that goes along the main roads,” Sutuntivorakoon said, “and I remember riding on it and seeing thousands of people just sitting down on the road. It was just the most bizarre thing you can imagine.”

More recently, Briones went to aprotestagainst Ms. Yingluck. “They started playing the national anthem; and being Thai, [I] felt like [I was] part of something,” she said. “It was a pretty overwhelming feeling to be there.”

Briones wanted to participate in the protest to have the experience, but then the protest became violent. “I don’t mind if it’s a peaceful protest, because they are just trying to speak for what they believe in,” she said. “But sometimes they take it too far.”

No one can know what coming elections will bring. Said Sutuntivorakoon, “I do hope for this whole thing to blow over quickly, because tourism is a big industry in Thailand and tourists won’t want to visit after this. Manufacturing is on the rise in Thailand as well, and investors won’t want to invest, so this is really going to hurt our economy . . . We have a great potential, but with all of this uncertainty and conflict, you don’t really know what is going to happen.”