You need to enable JavaScript to run this app.
A&E
Looking After Norman Headed For The Edinburgh Fringe Festival
Maddie Moon '16 Contributing Writer
February 4, 2014
No Comment 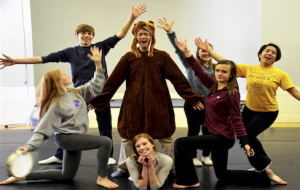 “This play is about making inter-generational friendships and keeping promises,” said Theater Director Catriona Hynds. “When Mrs. Scott falls ill, Georgia promises to take care of her cat. The only problem is that Dad is allergic to cats. Even so, Georgia keeps her promise to Mrs. Scott.”

Dorie Magowan ’15 is playing the role of Mrs. Jones, the social worker.

“This is the first time I’m doing a children’s show,” Magowan said. “It’s a lot of fun, but definitely very different from what I’m used to. Everything is much more exaggerated and very animated. The biggest challenge right now is pushing the boundaries of my comfort zone and getting used to the exaggeration.”

Mrs. Hynds is looking forward to the different nature of the play. “I have directed lots of children’s theater in the past, but not done so here at Deerfield Academy. It is a really important form of theater because it can have such a huge impact on young children. I am thrilled that our students will have an opportunity to see this impact when we tour local schools next month,” she said.

“I’m hoping to have an effect on each child’s experience when they see the show and instill a love of theater in them,” said Magowan. “I would love for a child to be excited about theater and participate in fine arts after seeing the musical.”

The theater program is taking this show to the Edinburgh Festival Fringe in Scotland this summer.

“We’re coming back to Deerfield on July 26 to tune up the show and get it back up to the standard we need it to be,” explained Sarah Jinich ’15. “On the 29th we’ll fly to London and spend a couple of days there. Then we’ll take a train to Scotland and stay there until August 11th, spending time performing, watching many other performances and experiencing Scottish culture.”

“I’m so excited because this is the biggest theater festival in the world,” Magowan added. “At any given time, there are a ton of performances going on. We’re going to have a lot of free time to go around and see shows together, which is going to be an amazing experience.”

“There are 17 students coming to Scotland with the theater program,” said Mrs. Hynds. “I’m really happy, because I have an opportunity to share a little bit of my homeland with the students. It is a stunning and deeply cultural country, and the Festival, which is like the Olympics for theater, is just the icing on the cake!”

The cast will be performing three shows at local schools as well as three public performances for the local children (February 14, 7 p.m. for Big Brothers and Big Sisters; February 15, 10 a.m. and 2 p.m; all in the White Church).