You need to enable JavaScript to run this app.
Opinion
For The Girls
Kay Calloway '14 Contributing Writer
February 4, 2014
No Comment 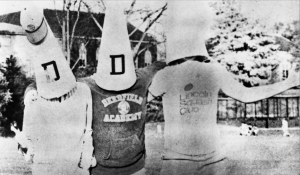 My sophomore year, Mr. Silipo asked my class to raise our hands if we considered ourselves feminists. I refrained from raising my hand (as did the rest of the class) because my instinctive response is to be blasé about everything.

At that time, I elected not to be a “feminist.” Well, my dramatic adolescent transformation into a senior has included a shift in my former apathy for women’s rights.

The senior girls recently had a meeting. I did not attend (see: “instinctual response”), but afterwards I was invited to a “For The Girls” group on Facebook, which seems to center around… female empowerment? Not exactly. It centers on clothing and Mean Girls, but it’s a start. We are finally standing together, not against “No Joke Zones” or cliques, but together.

Past girls’ meetings have been about not hurting each other’s feelings (I was trying to think of a list of things, but that pretty much sums it up).

I would offer up an alternative: that we stop accepting that girls are in this whiny, over-sensitive hole that was dug for us, because I really don’t believe we have to be in it.

Personally, I love how ruthless we females are. It proves we have a chance at eventually reaching that true equality we deserve. It’s not going to be handed to us, you guys. It has to be taken. The need to be “lady-like” is nauseating and needs to remain in the 1950s where it belongs.

Also in my sophomore year, I was suspended for not having a filter. That’s what it ultimately boiled down to. My whole life, without realizing it, I’d been a feminist. I wanted so desperately

to prove that I, too, could have a voice, and not be ashamed of that voice. I overcompensated for how weak the other women I saw were. I never wanted to be that docile.

Men are never worried about what they say, and rarely are they condemned for how they say it. Women deserve that privilege, and it’s up to other women to allow it to happen.

Though I’m not suggesting that we seek to hurt people, I’d rather apologize for offending someone than spend my life making sure I never do so.

So stop beginning and ending your thoughts in class with “I don’t know.” Don’t try to be “For the Boys” just to win their approval. Instead of shyly giggling at some guy’s inappropriate joke, counter with an even more inappropriate joke. I’ve heard them within the safety of the dorm room—I know they exist, guys.

Your personalities and your emotions are not predetermined by your gender. Love and shout about your unique opinions, because you’re brilliant and you matter.