You need to enable JavaScript to run this app.
Features
Study Like Royalty at King’s Academy
MARGARET CHAPPELL '15 EDITORIAL ASSOCIATE
December 18, 2013
No Comment 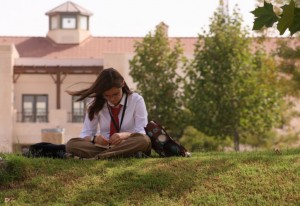 Deerfield students now have the opportunity to spend a year at King’s Academy in Manja, Jordan. King Abdullah II ’80 designed this boarding school after spending three years of his high school career at Deerfield.

In its second year as a foreign studies option, the Arabic Year program allows students to perfect their Arabic and broaden their perspectives abroad. The admissions process is similar to applying to typical boarding schools, and 20-25 students are accepted each year. Students can spend their sophomore, junior, senior or PG year at King’s.

Like Deerfield, King’s is set in an area that is farmland with few residential neighborhoods.

“There’s no Target down the street,” said Joseph Silvestri, the Director of Admissions at King’s, “and you’re not surrounded by mostly American kids.”

Although King’s is in the Middle East, “we call ourselves an American-styled school with an American curriculum,” explained Mr. Silvestri. “Still, we are certainly aware of Muslim sensibilities and are sensitive to that.”

Half of the teachers at King’s are American, and all of the classes are taught in English, except for Arabic and Islamic Theology.

King’s students attend Arabic classes twice a day, but Arabic Year students are not required to have taken any Arabic prior to arriving in Jordan.

“The program is designed to deal with various levels,” Mr. Silvestri said, “and half of our kids come in having never learned Arabic. Some [who know Arabic] arrive with [academic] backgrounds or [have it] in their family if they immigrated from the Arab world.”

In addition, King’s has only sit-down lunches, two of which are spent with advisory groups. To Mr. Silvestri and the King’s staff, sit-down meals are very important.

“When the original plans for King’s were on the board and designs were in place, the King of Jordan saw there were rectangular tables for the dining hall [and] he had that changed to round tables because he spent three years [at Deerfield] and he wanted that experience for King’s kids,” Mr. Silvestri elaborated.

So, who should take an Arabic Year? “For students who really want to pursue Arabic language studies, it’s a great opportunity because it is intense and they are surrounded by adults and peers who speak Arabic as their first language,” said Mr. Silvestri. However, he added, it is also “for kids who are just interested in learning about a different culture. Maybe the language is not that important, but they are curious about the Middle East.