You need to enable JavaScript to run this app.
Opinion
Mixed Messages About Sex on Campus
Kay Calloway '14 Contributing Writer
December 8, 2013
No Comment 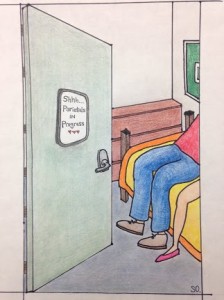 “Consensual sexual intimacy, while a normal and healthy aspect of adult life, is not appropriate for adolescents and is not permitted for students at Deerfield.”

Wow, Deerfield approaches the issue of sex like an uncomfortable parent. A parent who’s, like, 69 years old and never had a childhood.

Being “sheltered” is an endearing euphemism, and of course, that’s what we students would like to think is the reason the administration is against young, hormonal teens touching.

I mean, they DO want us to speak…once a month…from maybe 9:45 to 10:15…with a faculty chaperone and conversation cards.

We all know what teenagers—oh, wait, and ALL humans during and after adolescence—do. They touch and kiss, and at some point, I assume everyone has sex. We talk about it in health class; we even have condoms in a basket in the Peer Counselors office.

So, when are students allowed to use those condoms? It’s against Academy rules to use them in a bed, and evidently we’re not authorized to use them in the Arms Building, so, basically, Deerfield is telling us to find a more secretive, sketchy way to use them.

Maybe quickly do so right after the faculty resident in charge checks on you. Don’t close the door, but do make sure to put the bed on the side of your room where your door doesn’t open, so no one can see, because we want it to seem as if this isn’t weird.

But it is weird. It’s weird that in my room, my supposed home, I can’t watch the newest episode of New Girl—or even, God forbid, make out—with a boy before 8 p.m. (Also, parietals only at night is basically forcing intimate behavior. It’s universally known that nighttime ambiance fosters sexual tension, you guys.)

We apparently have gender issues at this school, and I’m willing to guess it’s because I’m not allowed to walk into most boys’ dorms without the fanfare of announcing my intentions to a resident. Parietals are riddled with subtext, and that’s most likely from the sexual-tension-at-night theory.

Friendly, platonic parietals are suspicious, because the faculty assumes that if there’s a boy and a girl together in a room they’re gonna try to have sex. The school sends mixed messages. WE EXPECT YOU TO BE MATURE ADULTS…but you cannot kiss, because you are immature children. INTIMACY IS NOT APPROPRIATE…but here are condoms on the DL (down low), because it’s probably going to happen. BE FRIENDS WITH THE OPPOSITE SEX! …but I’m going to check on you every 30 minutes, because boys and girls can’t actually be friends, silly.