After pursuing a career in law, Jamie Bucci, a new member of Deerfield Academy’s faculty, decided to switch her career track and go into college advising. Ms. Bucci graduated from Duke University with a major in psychology and a certificate in education, then continued on to Harvard Law School, where she began her five-year involvement in law. 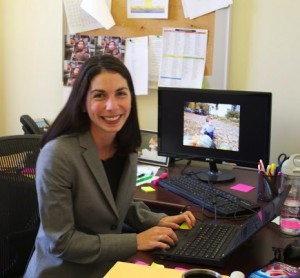 At Harvard, Ms. Bucci also gained experience advising local high school students in the college admissions process. After working at the law firm Ropes & Gray, and serving as an assistant vice-president at Massachusetts Mutual, Bucci decided to change her path, dropping her career as a lawyer and relocating herself and her family to Deerfield Academy to work with teenagers once again.

Bucci said, “Since I wasn’t sure what to do [after graduating from Duke] and I was afraid of not having a plan, I applied to law school. It really wasn’t a particularly thoughtful decision – more of a cautionary tale.”

Bucci intended to switch to child advocacy law after working at a big firm for a few more years. However, after realizing how difficult it would be to make the switch, she decided to dedicate much of her time to volunteering in the local community. She helped high school kids at legal education clinics, ran mock trials with middle-schoolers, and helped out with college advising at a program nearby.

Recognizing how much she enjoyed working with kids, Bucci said she would often think, “This is crazy! I know what I want to do, why am I still a lawyer?”

As she struggled to decide whether or not to continue her career in law, Bucci became a mother, which ultimately pushed her to make the switch. “Once I became a mom, I realized I wanted to set an example for my son to show him he shouldn’t be limited by fear, and that he should seek his best life, not the path of least resistance. So I started looking for jobs in education,” said Bucci.

A coach for girls thirds soccer in the fall and junior varsity lacrosse in the spring, and an advisor and associate on Poc I, Ms. Bucci has had to make many adjustments since her arrival at DA. She expressed enthusiasm about these changes, saying, “I love my Monday nights in Poc chatting with the girls about their weeks. I’ve really enjoyed getting to know my sit-down table groups. And coaching has been a great experience…. My advisees are bright and thoughtful, and I love talking with them about their hopes and their goals.”

As Ms. Bucci continues to adjust to her new life at Deerfield, she has formed relationships with both teachers and students on campus. Fellow college advisor Beth Bishop acknowledged the hours Ms. Bucc put into preparing for her new job this past summer: “I admire Mrs. Bucci’s decision to leave a successful law career to work at Deerfield, and I expect that she will find helping students navigate the college admission process more personally rewarding than the law.”

Students have been appreciating Ms. Bucci’s interest in them. Serena Ainslie ‘16 said, “She’s very caring—she genuinely wants to hear how your day was.”

Added Lilah Lutes ’14, “It’s so clear to me that she cares about everything I have to say.”

Though this life change has been dramatic, Ms. Bucci spoke fondly of her experiences so far. “I can’t imagine a better group of kids to work with,” she said. “I am also really lucky in that I have really wonderful, dedicated, smart, funny colleagues in the College Advising Office…Now I wake up excited to go to work every day!”