You need to enable JavaScript to run this app.
A&E
Behind the Scenes with the Tech Crew
Dorie Magowan '15 Staff Writer
November 7, 2013
No Comment 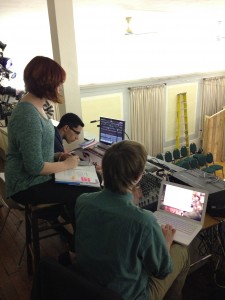 Behind the scenes of each theater production, the tech crew works to design and create the set of every show from the ground up. Over the course of each term, under the supervision of Theater Technical Director Paul Yager, the crew meets each day to decide what the set should look like and how to execute their plan. They work each week on planning and building, and then in the days leading up to the show, they pull everything together, including costumes, lighting and sound.

Andrew Bishop ’14 has worked on the tech crew every term since he came to Deerfield. “I started doing tech in seventh grade at Williston Northhampton School,” he said. “I’ve kept participating because it’s fun to see something you make go from being just individual parts to the finished product of the set. By the end of the term, you actually have a tangible thing that you made, and it looks awesome.”

Another core member of the crew is Hailey Nuthals ’14, who joined the team at the beginning of last year as stage manager for The Laramie Project. “It was fascinating for me to see how theater was put together,” she said. “Seeing the final product, and knowing I was a key piece in that was a feeling similar to what I get from band, but cooler.”

After working as a stage manager, Nuthals now hopes to have a career in the music business. “[Stage managing] was what made me want to do managing as a career and [gave me the idea] that I could do it with music, because music is my one true love. When you have that commitment, everything is so much more amazing. And you’re so proud of the product. It’s the best feeling,” she said.

Victoria Castellano-Wood ’16, who is in the tech crew for the first time this term, shares similar feelings to Nuthals’. “I like the behind-the-scenes aspect,” Castellano-Wood said. “But I also like seeing how everything is made to create a production, and all the steps that go into that process.

Destiné James ’16 is also new to tech this term, and along with Nuthals, is practicing skills for a future career. “I want to be a director when I’m older, as I like working behind the scenes and having one-on-one interaction with the actors,” she said.

Bishop has also learned to value the benefits of creating a show with the tech team. “There’s a lot of creative thinking involved and problem-solving when you’re building the set. That sort of mindset is really valuable,” he said.

However, Bishop feels that many people do not recognize the effort that is put into productions and that the creative work is not only the work of actors, but the entire team behind the scenes. “People don’t really appreciate tech,” Bishop said. “They always ask, ‘What’s that?’ People don’t know about it, and they don’t give it the credit it deserves. At Deerfield there’s respect for people who do sports, and not people who do theater, and I think that’s completely ridiculous.”

Nuthals compared the relationship between actors and tech to that of a car and its engine: “When you’re driving a car, what you notice is the sound of the engine and the comfort of the seats, but you forget all the little parts that are making those things happen. You can’t have a play without tech. It’s really cool to be a part of that, because then you are the play just as much as the actors, but people don’t see it. I love being the bridge between the two of them.”