You need to enable JavaScript to run this app.
Features
Who You Gonna Call?
Michelle Kelly '15 Staff Writer
October 16, 2013
1 Comment 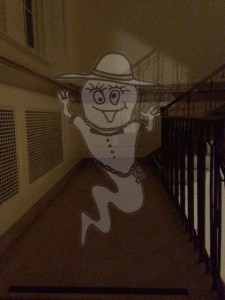 The Deerfield Inn—prominently located on old Main Street— is known for its colonial New England atmosphere, historical significance, and its ghosts.

One of the original historic inns of New England, the Deerfield Inn was originally built in 1884. The town of Deerfield has had a long and bloody history that includes the notorious Deerfield Raid of 1704. This may explain why Main Street and the houses along it have been a hotspot for spirits.

But not to fear, although there have been numerous reports by guests over the years about unexplained incidents: ghost behavior at the Deerfield Inn does not resemble anything out of the latest Paranormal Activity movie. “Our Inn ghosts are a little less horrifying,” commented current innkeeper Jane Howard.

A common ghost sighting at the Inn involves a woman named Cora Carlisle, a previous owner of the Inn, who is often seen wearing a dressing gown with a chain of keys at her waist. “Cora was very inquisitive and bossy in life and was the keeper of many of the villagers’ secrets,” explained Howard. Cora often knocks on guests’ doors, or gently pushes on people’s backs, urging them to go to bed.

“Hershel is our other resident ghost who likes to bother the guests in Room 148 from time to time,” said Howard. Hershel usually appears to guests as a box of bright light. “We hear that he sometimes tugs at the pillows under your head and once moved a glass of water from beside the bed to another table. He is not a scary spirit at all–more like a mischievous child,” said Howard. “He has, a number of times, given our bartender a push on the back when she was walking to the kitchen with a tray of glasses, and he turns on water taps and leaves them running.”

Several years ago a group of amateur ghost hunters came to the Deerfield Inn to film a documentary on the Inn’s paranormal occurrences. Using highly sensitive surveillance equipment, the documentarians recorded footage in areas where frequent sightings had been reported.

“It was fascinating to later hear the recording of a child’s giggling picked up by their sensors. This was from an area where the children and servants used to stay when traveling to the Inn with their families, which is now designated for a photocopier and storage,” said Howard.

Jane Howard and her husband Karl Sabo have been innkeepers at the Deerfield Inn for over 20 years and have yet to experience firsthand any ghosts in the Inn. “My husband and I are frequently at the Inn very late and very early and have slept in every room,” said Howard. “We have never experienced anything that cannot be explained, but who knows?”

Always feel a tinge of sadness when the spirits involved in an incident show child like characteristics. Unreasonable I know seeing I am unaware of the exact history of what happened! Great article on an interesting location.
Chris.