You need to enable JavaScript to run this app.
Editor's Picks
Meat Brings the Heat (to the Table)
Caroline Coppinger '15 Staff Writer
October 16, 2013
No Comment

Last spring David Keith ’13 started a petition to stop the consumption of antibiotic-fed livestock in the Dining Hall. 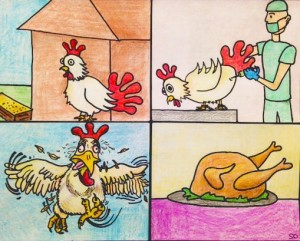 As Keith’s Change. org page explains, “The widespread use of antibiotics in factory farms poses a significant threat to the environment & human health. The use of antibiotics in factory farms is indiscriminate, unnecessary, and largely unregulated by the FDA [Food and Drug Administration]. Although the CDC [Center for Disease Control], AMA [American Medical Association], NRDC [National Resources Defense Council], and countless scientists and farmers have warned about the risks of current antibiotic practices, the government has failed to act with the public’s interests in mind.”

Now a freshman at nearby Amherst College, Keith hopes to continue the effort he started during his senior year. Although peaking at 342 supporters from around the community, the petition fell short of its goal by 158 people. Despite that, Keith said, “Accruing over 340 student signatures hopefully sent a message to the school that this is something the student body cares about.”

The comments on Keith’s Change.org petition indicate widespread support for changing the Dining Hall’s purchase of meat. Former DA College Advisor, Mr. Wayne Berger wrote, “We need to be a leader in the promotion of local and sustainable food sources.”

Libby Murray ’14 wrote, “I am eating this food every day; it’s so important and people don’t realize how much this affects you.”

Michael McCarthy, Director of Food Services, offered an explanation for the minimal changes at this point in time: “The ABF[Antibiotic-free] movement is very much in the media these days and resonates with some of our community members, but in my opinion, not the majority at this time.” He continued, “Currently our efforts are being focused on the Healthy Plate sit-down meal initiative. Our goal is educating the students more and incorporating into our menu fruits and vegetables, whole grains, monosaturated fats, and leaner or non-animal proteins.”

Mr. McCarthy concluded, “I feel, along with Kristin Loftus and Dr. Tom Hagamen, that this is the appropriate thing to do at this time.”

One of the main issues in changing to antibiotic-free meat is the expense. Serving numerous cuts of meat to about 700 members of the community multiple times every day quickly adds up. “During the summer we made contact with a vendor who has access to ABF meats, but the cost is much higher than what we presently pay for these proteins,” Mr. McCarthy said.

Keith argues a different view on the cost of antibiotic-free meat. “While the community’s health should be prioritized over dollars and cents, studies have shown that the cost of raising livestock without antibiotics is minor—especially when compared to the economic and human costs of infections and deaths from antibiotic-resistant bacteria,” Keith said.

Keith feels that more action might have been taken. “I wanted to raise awareness among students about this issue,” he said, “but more importantly to begin applying pressure on the administration to act.” He went on to say, “Antibiotic-fed livestock was an issue I had discussed with the school on multiple occasions, but nothing was changing despite the urgency of the problem and its serious moral implications. This was partly because we have long prioritized saving money in the short term over sustainability or abiding by moral principles (in this case, preventing human suffering caused by antibiotic-resistant infections). But it’s also because they didn’t consider this issue to be one where students are passionate for change.”

Keith encourages all members of the Deerfield community to involve themselves in this movement. “Like our country and much of the world, the school would prefer to act on its own terms and move at a dangerously slow pace—if at all—towards a sustainable lifestyle,” Keith said. “And ultimately nothing can change unless we—students, faculty, alumni, and other community members— put more pressure on the decision-makers of this school, following up this persuasion by helping them arrive at an attainable solution.”

Not all of Keith’s hard work has been lost. Mr. McCarthy noted, “The Dining Hall staff has changed dairy suppliers and our milk is hormone- and antibiotic-free as of August of this year,” he said, adding, “Our organic grass-fed ground beef is antibiotic/ hormone free. In regards to the main proteins of beef, chicken and pork, we have not changed to antibiotic -free.”

Looking back, Keith applauds the work of the Dining Hall and of those he has worked with in achieving this goal. “To be fair, there are problems with our nation’s politics and agricultural policy which create significant, but surmountable, difficulties for the school,” Keith said. “It should also go without saying that Deerfield is staffed with people I have a deep personal respect for and who seem receptive to some future improvements, and this includes Head of School Dr. Curtis and Mr. McCarthy.”

Although no significant changes regarding antibiotic-free beef, chicken, or pork have occurred, Keith is still hopeful about new steps in the future.