You need to enable JavaScript to run this app.
Opinion
How To Survive the Fifth Year of High School
Olivia Davis '15 Contributing Writer
October 16, 2013
No Comments 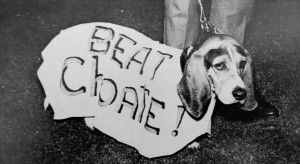 PHOTO FROM THE SCROLL '64

From the moment a Deerfield post-grad steps on campus, he or she is simultaneously admired and feared. Post-graduates possess a certain aura of mystery, world experience and maturity that comes with a high school diploma. Freshman know them as the intimidating 20-year-olds, who are elevated even above the highly revered position of a senior.

Seniors, at the same time hold a deep respect for post-graduates for having completed the high school experience. This persona can initially seem quite appealing, especially to any new student, yet the sentiment quickly wears off for PGs as they whirl back to what seems like the beginning of their high school career.

Living at home with all the freedoms that come–driving a car, late weekend curfew, the ability to play hooky and a general sense of independence–is a stark contrast to the nitty-gritty rules and restrictions at boarding school. The AP system, stringent parietal rules and the severe disciplinary system can feel alien.

PG Justin Finan ‘13 stated, “The transition was incredibly difficult, coming from home where I could basically do whatever I wanted… to Deerfield where it seemed like I was back to being 14 years old and a freshman.”

This seems to be a common theme among post-graduate students and a likely cause of the many DC hearings in this bracket.

I tend to sympathize most with those students who end up on the opposing side of the deans, based on the absence of an understanding of Deerfield expectations and a way to cope with them.

The contrasting dichotomy between life at home and life at school, in extreme cases, makes the Academy seem like a prison. So next time you envy a PG, consider the possibility that he or she might feel more trapped and isolated at Deerfield than you do. A friendly word instead of a frightened stare goes a long way when interacting with our revered post-grads.