You need to enable JavaScript to run this app.
Buzz
Welcome, New Faculty!
Editorial Board
September 10, 2013
No Comments 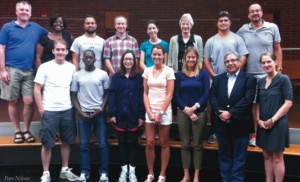 Aside from the new students who arrive on campus in September, the new faculty also add more flavor to the Deerfield community. Here are some examples of the unique aspects of our newcomers:

Jamie Bucci, a college advisor, hates the taste of Coca- Cola so much that if she were dying of thirst in the desert and it was the only liquid available, she still wouldn’t drink it.

Drew Philie, a member in the Admission and Athletic offices, enjoys back-country skiing.

Pamela Safford, our Dean of Admission, moved 10 times before she turned 13.

Charlotte Patriquin, our Interim Director of the Boyden Library, is a happily transplanted Midwesterner, having grown up in rural Minnesota and attending college in Iowa.

Caroline Stedman, a member in the Admission and Athletic offices, spent eight years of her youth competing in Irish Step-Dancing.

Mark Spencer, our Director of College Advising, has read over 75,000 college applications.

Marjorie Young, our Director of Inclusion and Community Life, hails from the Caribbean, but really dislikes spicy food.

Haley O’Neil, a Spanish teacher, is an aviophobic.

Peter Hynds, a member of the Admissions office, was once asked to tap dance on a children’s television show Mister Rogers’ Neigborhood.

Jaime Correa, this year’s Wilson Fellow and a Spanish teacher, used to play the charango, a small Andean guitar traditionally made from an armadillo shell.

Neil Jacobs, a team counsel for the Boston Celtics.

Jael Hernandez-Vasquez is a “self-trained linguist” and likes to experiment with different sounds, so don’t be surprised if you see him walking around talking to himself.