You need to enable JavaScript to run this app.
Buzz
Return of the Flaska
Garam Noh '15 Editorial Associate
September 10, 2013
No Comment 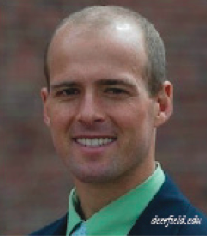 Jan Flaska, Dean of Spiritual and Ethical Life at Deerfield Academy, is returning this fall after a year’s leave, during which he worked towards a doctoral degree from Catholic Theological Union in Hyde Park. The year away from DA has allowed Dean Flaska to form new ideas to explore at Deerfield.He is already developing two new courses with both spiritual and academic focuses.

“The Wisdom of Silence,” a new elective developed by Dean Flaska, will be offered starting the spring of 2014. The basis for the course is rooted in his thesis, which explores whether the wireless technology and social media of our day have an adverse effect on adolescent spirituality.

“Basically, I am working to both explore the worth of silence in the life of adolescents and to invite adolescents to embrace it with some regularity,” he said.

His proposal? That stepping away from “all of the social demands of [adolescent] circumstances” is a good thing to do from time to time.

In “The Wisdom of Silence,” students will “explore the development of the spiritual and mystical traditions in history to the present day” and read excerpts from a variety of spiritual classics. They will eventually be expected to engage in the spiritual practices of their choice, and intentional and prescribed silence will be an important part of the coursework. Deerfield will be hosting a gathering in October (also called “The Wisdom of Silence”) to be attended by educators from peer schools but open to students as well.

Dean Flaska collaborated with Jordan Montour ’13 to develop a second course called “Native America.” In late June of this year, Dean Flaska visited the Kahnawake Mohawk community just south of Montreal, where Montour lives, to make progress on the course, which will introduce the Native experience and Native spirituality to students.

“Given the location of our inquiry, particular attention will be given to the Native populations that reside in New England states and southeastern Canadian provinces,” explained Dean Flaska. Montour ’13 himself is a descendent of Eunice Williams, one of the “captives” from the 1704 Deerfield Raid, which is considered an important part of Deerfield’s local heritage. “[Jordan] was a great host,” said Dean Flaska, “and the class is coming together.”

The Flaska family spent the year in downtown Hyde Park, just south of Chicago and near the shore of Lake Michigan. The family also had the opportunity to take a memorable two-week vacation in May, traveling around Lake Michigan and the Upper Peninsula of Michigan.

Dean Flaska described the trip as “a bit of a Karbon Heritage tour,” during which he and his family had a chance to acquaint themselves with the people and places of Spanish teacher Cheri Karbon’s youth. Ms. Karbon is a “Yooper” (someone from the Upper Peninsula), Dean Flaska added that he will “soon be publishing the official guide to this rewarding tourist attraction.”

Dean Flaska, who will be co-coaching the varsity soccer team with Mr. Heise this year, also made time for different athletic commitments during his year away. He was the assistant soccer coach at the University of Chicago, the coach and a player on the UChicago men’s club lacrosse team, and an assistant coach for the Mount Carmel High School lacrosse team.

The year away has afforded Dean Flaska many kinds of unique opportunities. “It was a wonderful year,” he said, “but we are glad to return.”