Rory Cowan ’71 will address the Class of 2013 as Commencement speaker. 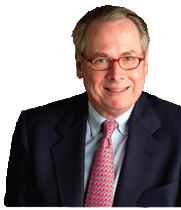 Mr. Cowan is currently the Chairman and CEO of Lionbridge, a company he founded in 1996. Following the modern technological trends, Lionbridge’s innovative business models have redefined the nature of “cloudbased” work by combining more than 100,000 at home professionals in over 100 countries.

Before Mr. Cowan started Lionbridge, he was the Executive President and of the Management Committee at R.R. Donnelley & Sons, a printing services company.

Mr. Cowan also serves on the boards of, and is an active investor in, Bostonarea technology companies that focus on the intersections of services and the Internet. He has also been involved with many philanthropic endeavors in Boston.

“I think it’s great that he is the Commencement speaker,” commented Mimi Morsman, Director of Alumni Relations. “He has such a great sense of Deerfield via his involvement with the book A Sigh of Change, being a parent of three Deerfield graduates, and serving as a trustee. Besides, Mr. Cowan is loyal to Deerfield’s mission of educating global citizens, and he understands what is important for young adults to learn in today’s competitive world. His business has taken him all over the world, and it will be fascinating to hear his message to the Class of 2013.”

Seniors also chimed in on their expectations for the speech.

John Lee ’13 said, “I expect to hear about what course his life has taken since his graduation from Deerfield, and how his experience here has helped him chart out the course for his own life.”

“My dad came to Deerfield as a new junior,” Thomas explained. “Since then, my sisters (‘07 and ‘08) and I have gone to Deerfield as well. Deerfield’s definitely been a huge part of our family, and I know it always will be. Although I don’t know exactly what his speech will be about, I’m really looking forward to hearing what he has to say.”

“I am really pleased that Mr. Cowan accepted the invitation to be our Commencement speaker for the Class of 2013,” Head of School Margarita Curtis said. “Mr. Cowan has witnessed the evolution of Deerfield over the past forty years, and contributed meaningfully to its growth and change while remaining a strong steward of its core values and traditions. His deep expertise in the hightech arena on one hand, and familiarity with the school’s founding ethos on the other, place him in a unique position to determine how Deerfield Academy can remain strong and relevant in a world of rapid technological change and constant connectivity.”