Lena Mazel ’13 has contributed to Deerfield’s dance program for four years. She first joined dance through taking it as an academic class and a co-curricular in her freshman fall.

“I remember only doing the splits on my good side, because I didn’t want people to think I wasn’t a good dancer for not having both of them,” Mazel recalled. Since the beginning, she has become more comfortable, describing herself now as “such a goofball in class.”

Mazel has witnessed the dance program evolve quite a lot through her four years. In her first year, the classes were only an hour long for three days a week.

“The classes seem tougher, longer, and more challenging now,” Mazel explained. “I think if I’d come as a freshman into the program the way it is now, I would have been completely overwhelmed. I love the intensity our program has now, but that intensity has definitely built up over the years.”

Mazel also loves the teachers in the dance program. “They’re encouraging and inspiring and funny, and all have such unique personalities. There are fewer people dancing at outside studios because our program is giving them enough now,” she said. “So many Deerfield dancers can really own who they are in and out of the studio, and dance with joy and humility.” 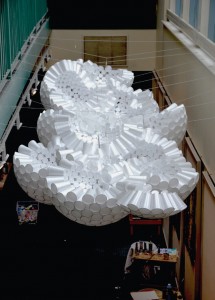 Mazel is still decidingthe roledance will play in her future. “Whatever happens, I’m happy with what I’ve learned at the Deerfield dance program about work ethic, friendship, and dance itself. I’m grateful that dance brought me here, so I could learn important lessons outside of the studio too,” she explained. “Dance itself ha
s the potential to teach people so much about themselves and the world around them, and those lessons won’t leave me, even when dancing itself does.”