You need to enable JavaScript to run this app.
A&E
Theater Department Builds Suspense With All My Sons
Penelope Mckeefry '15 Editorial Associate
April 18, 2013
No Comments 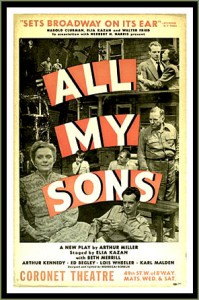 All My Sons' playbill.

This spring, Deerfield’s theater program will put on a production of the play All My Sons by Arthur Miller.

The play was written in 1947 and since has won several awards – including the first Tony award for Best Play. The excellent reception of All My Sons made Miller a prominent figure in American theater, as it was his first play.

’13 will play the lead role of Joe Keller. Of the cast, Hynds is confident that she has “very, very good company!”

Dorie Magowan ‘15 feels a similar excitement: “I completely love the story of All My Sons. It’s extremely complex and the story arc involves a huge range of emotions and tension between the characters. There is a lot of suspense leading up to the ending that will keep the audience eager to hear every word from the actors,” she said. “My character, Ann, is quite devious and cunning throughout the story. She’s the reason I fell in love with the play, so I’m very excited to portray her.”

“All My Sons will present something new this season, because it’s an entirely dissimilar genre from the other two productions, especially the musical,” said Mrs. Hynds.

“I think that people have high hopes because Little Shop was such a hit, and this will be too,” agreed Kate Ginna ‘14. “But it’s a very different play. So I’m very excited to be a part of it.”

The play is also the type of powerful theater that Mrs. Hynds is most fond of. She started her professional career directing a different Arthur Miller play, The Ride Down Mount Morgan, and had the opportunity to collaborate with the writer himself.

Mrs. Hynds believes that the cast will end the year as strongly as they have begun. “This is going to be a fabulous production and there will be a few surprises in store for the audience,” she said. “You need to come and see how we are going to transform the studio yet again!”

Deerfield’s production of All My Sons will open on May 21st and close May 25th.