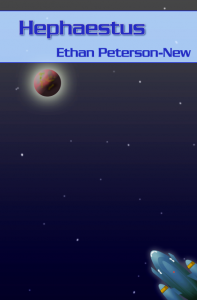 “All good sci-fi starts with the question: ‘What if?’” said Ethan Peterson-New ’13. This is the “empowering” genre of his new and second novel, Hephaestus, named after the Greek god of craftsmen. Peterson-New just finished Hephaestus after working on it for over four years. He started it when he was a student at Eaglebrook School.

Peterson-New, advised by English teacher Mr. Thomas- Adams, spent this past winter term writing 400 pages of the book. “Once I had the idea, it was impossible for me to leave it alone,” Peterson-New said. “It would have been sad to see the idea die in my head rather than find life on the page, or at least that’s how it seemed when I began writing.”

His passion for the craft was ignited in 8th grade, after being given a year-long assignment of writing a 150-page novel. “Everyone else hated it, but for some reason, I enjoyed it,” he said. “After I finished it, I immediately began writing [Hephaestus].”

Peterson-New has always viewed writing as a source for inspiration and creativity. “I’ve always enjoyed writing stories. I grew up with The Hobbit and The Lord of the Rings, so that kind of literary creation is really appealing to me. There’s so much you can create,” he explained.

For Hephaestus, he began with an initial framework, the aforementioned question: “What if?” After that, he started to fill in the details. The novel follows a group of people who arrive on the planet of Hephaestus, and through an unexpected course of events they find themselves involved in an international conflict.

Writing also has many personal benefits for Peterson- New. “For me, writing is an outlet of expression—I’m not a very outspoken guy, and I am not really a ‘voice’ in the community, so any time I have the opportunity to reach an audience and say something meaningful, I can’t pass it up,” he stated.

This May, nearing Parents Weekend, the Deerfield community will be able to read Peterson-New’s novel after it is self-published. He then plans to send the book to be published for a wider audience following this release.

After Deerfield, Peterson-New wants to continue pursuing his love of writing. He said in 20 years he hopes to have “a lot of books published, and maybe some movie adaptations. It is something I enjoy, so whether it’s for me or for others, I will continue to write.”