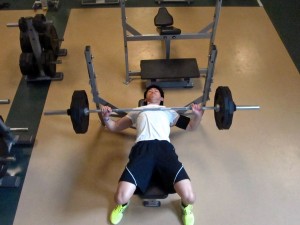 Joe Lee '13 works on his upper body in the weight room.

Since the creation of the Special Exercise co-curricular, or “Special X,” there has been much debate about whether or not the co-curricular option hinders Deerfield’s varsity sports program by taking away potential players.

While students enjoy this opportunity to take a term off from more demanding co-curriculars, and perhaps also to prep for a certain sport, Varsity Track Coach Mike Schloat said, “Personally, as a track coach, I hate to see the caliber of athletes that I see in Spex right now. A lot of them could really help my team, for example, as well as their school at large.”

Mr. Schloat understands, however, that most participants in Spex have other obligations as well. “I know that many students in Spex are participating in two terms of varsity sports already… We live in a world where high school athletes, especially students at Deerfield, are expected to pursue their sport more vigorously so that they can play at the next level.”

Although there are students who do Special X in place of a varsity sport, Ms. Mitchell, one of the trainers, does not consider these cases to be damaging to Deerfield as a whole. “Sometimes there are some athletes that choose to do Special X over varsity sports, but a lot of times, there are people who just don’t have a good fit for that particular season.” She added, “I think there are some instances where maybe numbers are hurt, but I feel like the people who really excel at certain sports are pretty dedicated to those sports anyway, and would choose to participate in a sport over doing Special X.”

Eliminating Special X would also narrow the selection of athletic options that are available to prospective applicants. “We want to offer choices like a large school, but we also want to … maintain that small-school aspiration of a tight-knit community,” Ms. Liske, a field hockey coach, explained.

If Special X were not an option, varsity athletes would experience more difficulties in finding the time and opportunity to improve for their main sports during the off season.

But keeping Special X the way it exists, in Mr. Schloat’s opinion, could also be harmful to Deerfield’s success in sports. “[Having students specialize] is really unsustainable for a school of our size, of 630 students. We will ultimately end up with a program with distinct winning teams and losing teams.”

The question remains: how can Deerfield solve this problem?

“There is some talk about possibly changing our expectations, of limiting Spex to people who participate in two terms of interscholastic sports,” Mr. Scholat said. “I think this is fair, as the school is offering admissions, exposure, and excellent coaching, in the expectation that students will give back excellence.”

For now, Ms. Mitchell finds a possible solution in coaches reaching out to those who pick Special X as their co-curricular option: “I think in some cases a coach could seek a Special X participant out and work out a deal with them, [convincing them] that a team is where they really belong.”

Though changes might be called for, Mr. Schloat does not consider Special X so damaging that it should be eliminated. “I think just one term of specialization and two varsity sports is a healthy balance, that doesn’t worry me,” he said. “But my concern is for when an athlete does Spex one term and rec squash another, and then their main sport, gaming the system in order to only participate in one season of interscholastic sports.”

For students who feel the need to take a term to prep for their “main sport,” Mr. Schloat expresses his sympathy: “Students feel the pressure of colleges, which want applicants that are excellent at one sport. [Colleges] will say they would prefer students cross-training and participating in different sports, but also that applicants should be playing at a Division I level in the sport they’re being recruited in, which is kind of contradictory.”